We don’t lie about our marriage - Okyeame Kwame and Annica 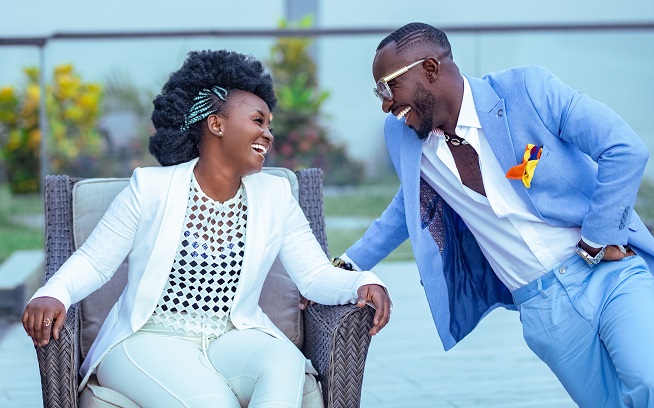 When it comes to celebrities who have not been shy to show off their marriages, especially on social media, Rapper Okyeame Kwame and his wife, Annica, are right at the top of that chain.

Over the years, the couple has posted pictures of themselves in public displays of affection, have shared a lot of insight into their marriage and on their anniversaries, they feed our sight with delectable pictures along with posts of affection.

While people think celebrities only show off their good sides on social media and hide the skeletons in their closets, Okyeame Kwame and Annica say they tell no lies about their marriage as they get ready to launch their first book, Love Locked Down, this weekend.

Speaking with Graphic Showbiz, they said they were not afraid of any added scrutiny publishing their book would bring to their marriage because they had been truthful.

“I think it is Plato who said that ‘truth is the object of all enquiry’ so there is no way I am bothered about scrutiny of my marriage. I’m not afraid of what it will bring because it is the truth,” Okyeame Kwame said.

Annica also chimed in saying, “If you’re not hiding anything, then there is nothing to be afraid of. We are not bothered by scrutiny because we are telling the story as it is, with zero embellishments.

“We don’t really care what anyone thinks about us or our marriage, we live our lives. We got married the way we wanted to, signing at the Kumasi Metropolitan Assembly (KMA) minus rings cost us about GH¢300 and we didn’t care what our family would say.

Love Locked Down, which Okyeame Kwame and Annica wrote with Kyei Amoako, the man who compiled their ideas for the book, is at its core, the experiences the two have gathered in their 12-year marriage and what they think other people can learn from.
The motivation for the book is from the many messages in their DMs from people seeking advice on relationships.

“We didn’t set out deciding to post pictures of us together on social media, as a couple, we just go with the flow. We don’t really plan to say post a picture and say something about it. But when we posted the pictures people started asking us questions in our inbox asking if marriage was as nice as we made it seem.

“Soon people started coming to us with marital problems and whenever we asked them questions, we realised that many people go into marriage knowing there are problems and then they end up not being able to handle it.

“So based on all that, we decided to put what we do into a book and also offer some of the recommendations we have given to people that have worked,” Annica explained.

Okyeame Kwame: I am not interested in MUSIGA presidency

Love Locked Down is from a his and hers perspective and they narrate their experiences from different viewpoints. While Okyeame Kwame talks about issues from a secular and masculine perspective, Annica comes at it from a religious and female perspective.

Some of the topics the book discusses include crucial conversations before you say ‘I do’, why are you getting married?, sex before marriage, making and managing money as a couple, conflict and resolution, religious differences, keeping things hot with romance, sex and intimacy and so much more.

“One of the key things we do at the end of each chapter is to provide a worksheet for people, we encourage them to evaluate what they’re experiencing. There are critical conversations to have at the end of every major chapter.

“Another interesting fact to know is that we don’t agree on all the things; for instance, I disagree that the man is the head of the family but Annica agrees, I believe in sex before marriage but Annica doesn’t,” Okyeame Kwame said.

Although a number of high profile marriages have crashed, creating the perception that celebrity marriages don’t last, marriages like that of Okyeame Kwame and Annica are inspiring and it is not surprising that the couple have said some celebrities have sought advice from them over time.

“Yes, we have some celebrities asking us for advice on their issues, some before they get married and others who are still married. Others have even engaged me in the comments section of some of my posts. But most importantly, Annica gets a lot of young ladies asking for advice in her inbox and we realise that many people are struggling in their relationships,” Okyeame Kwame said.

While writing the book, which they went through with a fine-tooth comb, the couple said they fell in love all over again. “We reminisced over many things and it brought back many memories we had forgotten. We revisited things we had said we would do but hadn’t gotten around to doing. It brought back warm feelings we fell in love over again,” Annica disclosed.

At the end of the day, what Okyeame Kwame and Annica hope people will take away from the book is a sense of liberation. “I’m hoping it will truly give them the liberation I have, to know that they cannot be pressured into anything. If you feel liberated, you will not bow to societal pressure and you can do things at your own pace and you can live life on your terms,” Annica said.

Okyeame Kwame added, “I hope they understand that you are not the half of anybody. As a being, you’re complete, powerful and resourceful and your happiness is in your hands. Your partner is also a complete being and once you come together and you accord him/her the respect you have for yourself, you will free yourself of depression or anxiety.”

Love Locked Down will be launched on Saturday, May 15, at the Ecobank Headquarters Auditorium at Ridge in Accra. It will be in two sessions with the first one from 4 to 6 p.m and 7 to 9 p.m.