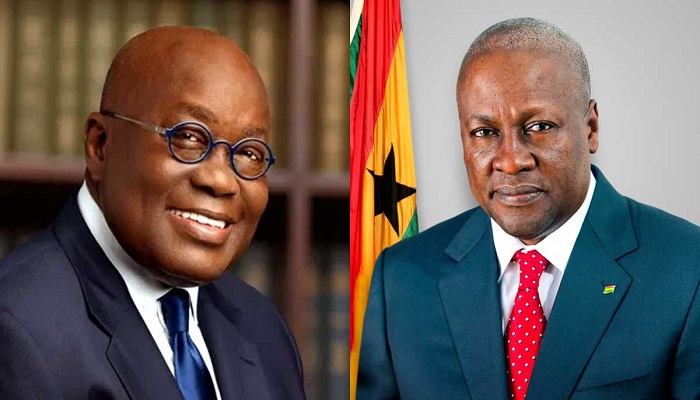 AFTER more than a year of tortuous campaigns across the country, the two leading political parties are now crystalising their messages around the wellbeing of voters, as the day of reckoning draws closer.

With the health of the economy in sharp focus, the two protagonists are telling voters to examine their standards of living before casting their votes on December 7 as part of a grand scheme meant to convince the over 17 million electorate.

While the ruling New Patriotic Party (NPP) points to a glossy picture of a resilient economy, an improved digital sector and well-thought-out social intervention programmes, chief of which is the Free Senior High School programme as bases for #4More, the opposition National Democratic Congress (NDC) cites mounting debts which have exceeded sustainable levels, deteriorating standards of living and corruption among public officials and appointees of the government as the reasons why the country must be #Rescued.

Although sharply divisive positions, both parties are speaking to the fundamentals of one economy; the one that they have been canvasing for the mandates of Ghanaians to manage.

It is the last stroke of their political manoeuvring towards securing the compassions of voters to either retain the NPP's presidential candidate, President Nana Addo Dankwa Akufo-Addo, for a second straight term or bring back the NDC's candidate, former President John Dramani Mahama, to complete a second term come election day in just seven days from today.

The Vice-President, Dr Mahamudu Bawumia, who leads the NPP’s charge on the economy, said on November 26 that the government had over the last four years stabilised what he described as a prudently managed economy.

Two days later, on November 28, former President Mahama painted a different picture, when he repeated earlier assertions that the government had borrowed more in four years than the country had done in 59 years.

“Yes, we have a broken economy but it is time for the person who broke it to leave so that somebody can come and fix it,” he added.

A third rematch, the 2020 elections is a familiar contest for the two presidential candidates, albeit on an economy that has been buttered but is now beginning to show some recovery from the ripples of an unprecedented global health pandemic.

In 2012 and 2016 when Nana Akufo-Addo and Mr Mahama slugged it out for the presidency, the economic situation was critical in determining the winner but its challenges were not pandemic-induced; they were inflicted by internal and externals challenges with the International Monetary Fund (IMF) as a bailout partner.

But now ravaged by the raging coronavirus (COVID-19) pandemic at a time when the IMF is just an observer, the economy has been forced to take on more expenditures – financed from increased debts – at a time when economic activities and revenues had slumped and the malaise from the global economy (resulting from the pandemic) was reflecting in the external sector.

The deficit has been projected to more than double to 11.4 per cent; projected growth is seen crumbling from an earlier forecast of 6.8 per cent to 1.9 per cent this year (the lowest in three decades), job losses have peaked although official data is hard to come by and normalcy is seen returning only after 2024.

An economist and a researcher, Dr Said Boakye, told the Graphic Business that the situation had now created an economy that was on “debt-string” and struggling to survive.

“The economy is now debt-stringed and that is because there is no IMF to monitor the expenditures. The government is likely to blame it on COVID-19 but that is not the cause; the situation was dawning before the pandemic,” he said, citing the growth in the ratio of debt-to-gross domestic product (GDP).

He said the share of debt-to-GDP suffered a sharp rise between December 2019 and September this year, when it grew from 62.4 per cent of GDP to 71 per cent of GDP respectively – reflecting the substantial appetite for borrowings to finance an expansive budget.

Dr Boakye, who is the Head of Research at the fiscal policy think tank, the Institute for Fiscal Studies (IFS), said uncontrolled expenditure prior to the outbreak of the pandemic, due to the absence of the IMF, exacerbated the situation.

While campaigning and the general search for power are tedious, the outcome presents a herculean task for winner, given the peculiar nature of the situation.

The IFS Researcher said as a result of the fiscal slippages witnessed now, the winner of the December polls was set to inherit “a devastated economy that will almost completely be dependent on debts.”

“So, the winner has to be creative on how to control expenditure and shore up revenues,” he said.

He cited the compensation bill as one expenditure item that could be tampered with through freezes on pay increase to help create additional fiscal space.