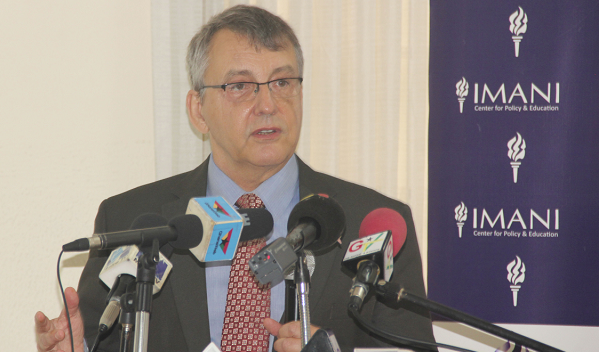 poor performance has been largely attributed to the large size of the government, gender inequality, high inflation among other factors that impede national growth and development.

The economic freedom index measures a country’s economy with regard to whether it allows its citizens to take independent economic decisions to their own benefit.

A Resident Fellow at the Fraser Institute, a Canada-based think tank, Mr Fred McMahon, made this known when he presented an overview of economic freedom of the world with the focus on Ghana in Accra yesterday.

The event, which was organised by Imani Ghana for Policy Education, a policy think tank in Ghana, had the theme: “Imani’s Audit of Ghana’s Economic Freedom: Improving Ghana’s rank in the Economic Freedom Index.”

Touching on the size of the government, Mr McMahon said most relatively poor nations had small-sized governments but Ghana was an exception because of its huge government which was unwarranted for a nation with a poor economic situation.

The size of the government had implications for spending, he pointed and advised that spending be kept under control or the country risked having continued weak economic prospects.

He cited Botswana and Rwanda as some of the countries in Africa with low— inflation figures who ranked higher in terms of economic freedom.

Ghana equally performed poorly in the area of red tape as it was ranked 90th in the world, limiting the dynamism of the economy.

He indicated that access to credit was essential in building a successful economy but Ghana was behind with respect to the averages.

The Founding President and Chief Executive Officer (CEO) of Imani Africa, Mr Franklin Cudjoe, criticised the government for the manner in which the economy was being managed, particularly the intention of increasing taxes in the mid-year budget.

“One of the biggest mistakes the government will make is to increase taxes to fund their Free SHS and other propaganda projects. They should not dare try it,” he told journalists.

He deplored the waste in the system as a result of what he described as the collusive contracts with inflated values.

Mr Cudjoe questioned what the government did with the GH¢1.2 billion it earned from tax exemptions and wondered why Ghanaians should be subjected to further hardships with a possible tax increase “to feed their expansionist agenda like one-district, one-factory”.