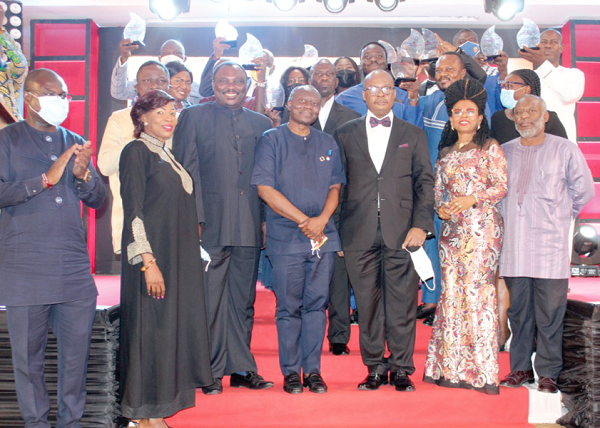 Twelve companies have been bestowed with honourary awards at the ninth Association of Ghana Industries (AGI) Ghana Industry and Quality Awards in Accra.

The honour was in recognition of their ability to distinguish themselves in the various areas of operation in the midst of difficult times triggered by the outbreak of COVID-19 pandemic this year.

The recipients who were presented with certificates of honour as well as plaques, were the Skyplus Hotel Resort, Global Poly Limited, OsAfric Ventures, Entrance Pharmaceutical and Research Centre, Zoomlion Ghana Limited and Kasapreko Limited.

A special citation was also given to the Noguchi Memorial Institute for Medical Research in recognition of its sterling leadership in the fight against the COVID-19 pandemic in Ghana to ensure the safety of all lives.

Unlike previous awards when the association went through the normal cycle of opening nominations in February and selecting award winners in October on a competitive basis, the outbreak of the COVID-19 pandemic did not allow such a process for this year’s award.

It was held on the theme “Building resilience and local capacity towards AfCFTA” and drew captains of industry as well as government officials, including the Minister of Finance, Mr Ken Ofori-Atta; the Governor of the Central Bank, Dr Ernest Addison, and a Deputy Minister of Trade, Mr Robert Ahomka-Lindsay.

The Vice President of the AGI, Mr Charles Darku, commended the government for the banking sector reform but said the full benefit for the private sector would be realised when the lending rates dropped to significant levels to reduce the cost of doing business.

“Governor, lending rates still hovering around 25 per cent to 27 per cent is still high, and therefore, efforts should be made to bring it down to competitive levels of Cote d’Ivoire, Nigeria and other competing countries.

“This is critical in the wake of the looming competition at the African level with the implementation of the AfCFTA ," he said.

He added that in the wake of the implementation of the AFCFTA, standards and quality issues could not be taken for granted, and urged the Ghana Standards Authority to work with the AGI to develop an effective mechanism to monitor the quality of goods produced, especially for exposure to enhance the volume of Ghana’s exportable products.

Dr Addison, who was the guest of honour, said over the past eight months the central bank had implemented complementary policies to support the government’s intervention programmes meant to cushion the economy and small and medium-sized enterprises against the impact of COVID-19.

He said the recent clean-up and recapitalisation exercise had created a well-capitalised and liquid banking sector that could take advantage of big ticket financing and investment opportunities.

Dwelling on the call for a reduction in interest rates, the governor said there was the need to allow the system to consolidate itself which could trigger interest rates to go down consequently.

"I say so because if you look at the profile of the policy rates over the last three years, we have consistently gone down on the policy rates till January this year when we stopped at 14.5 per cent and the monetary policy rates have sort to stay there.

"So this is not the time to put the financing of the budget at risk by sort of going further down on the policy rates. I think that as we move into 2021 when the fiscal challenges are sort of moderated one can reasonably expect the monetary policy rates to respond towards improvement,” he said.

Mr Ahomka-Lindsay said to support Ghanaian businesses to take advantage of the AfCFTA, the government had put in place a more supportive ecosystem for industrialisation and private sector development.

For instance, he said the government had rehabilitated a total of 262 kilometres of railway line, while an additional 600 kilometres of greenfield railway line was under construction, with 67 critical road projects currently at various stages of completion.