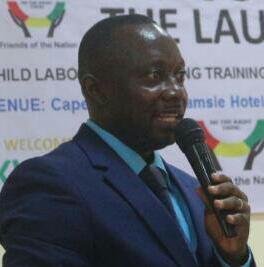 Stakeholders in the fisheries industry are asking for the mapping of all fish landing sites across the country to protect the livelihoods of more than three million fishermen.

The stakeholders maintained that the ongoing encroachment and sale of lands along the fish landing sites were adversely affecting fishing activities.

Speaking to the media on the sidelines of a two-day workshop on fish landing site mapping and securing last Friday in Accra, the Programmes Manager of Friends of the Nation (fishery advocacy group), Mr Kyei Kwadwo Yamoah, observed that it was time for the government and relevant state agencies to put in systems and policies to effectively enhance the operations of fishermen.

The workshop was organised by the Food and Agriculture Organisation (FAO) of the United Nations (UN), in partnership with Friends of the Nation (FoN) and the Far Ban Bo project.

It sought to strengthen the capacity of institutions on the voluntary guidelines on the Responsible Governance of Tenure of Land, Fisheries and Forests in the Context of National Food Security (VGGT) and the Voluntary Guidelines for Securing Sustainable Small-Scale Fisheries in the Context of Food Security and Poverty Eradication (SSF-Guidelines).

It also created a platform for stakeholders to dialogue on fisheries governance issues and Illegal Unreported and Unregulated (IUU) fishing to contribute to sustainable fisheries livelihoods.

Mr Yamoah stated that the country’s fish landing sites should be properly demarcated, properly documented, properly mapped and legally given approvals so that those lands would last for fishermen.
“This will be a legacy that fishing communities can rely on so that in future, other people will not come in and take these lands from fisher folks,” he said.

According to him, about 10 per cent of the population earned a living from fishing activities.
Mr Yamoah noted that the government would work with key players in the fisheries sector to help identify future lands that could be used as landing sites and help secure them for that purpose.

“We are looking at securing these landing sites so that when the time comes, the government will not have to pay compensation to persons who have already settled on these lands,” he said.

A Land Tenure Officer at the FAO, Dr Wordsworth Odame Larbi, said many people in the country were vulnerable to becoming food insecure if problems associated with landing sites were not resolved.

In Ghana, he said, 68 per cent of lands were suitable for agricultural practices, however, it was unfortunate that only 10 per cent had been registered for such purposes.

He said the FAO would strengthen its partnership with the Ministries of Fisheries and Aquaculture and Food and Agriculture to achieve the Sustainable Development Goals One and Three of ending hunger, and promoting good health and well-being.

He urged the government to integrate instruments adopted by the international community to promote responsible governance and protect the operations of the fisheries sector.

A Chief from Whuti in the Anloga District, Togbui Kpemini Gawu V, observed that encroaching on landing sites did not only increase food insecurity among fishers and their communities, but also deepened poverty situations among them.

He, therefore, called for a collaborative effort to implement policies that would protect the sites and secure livelihoods.