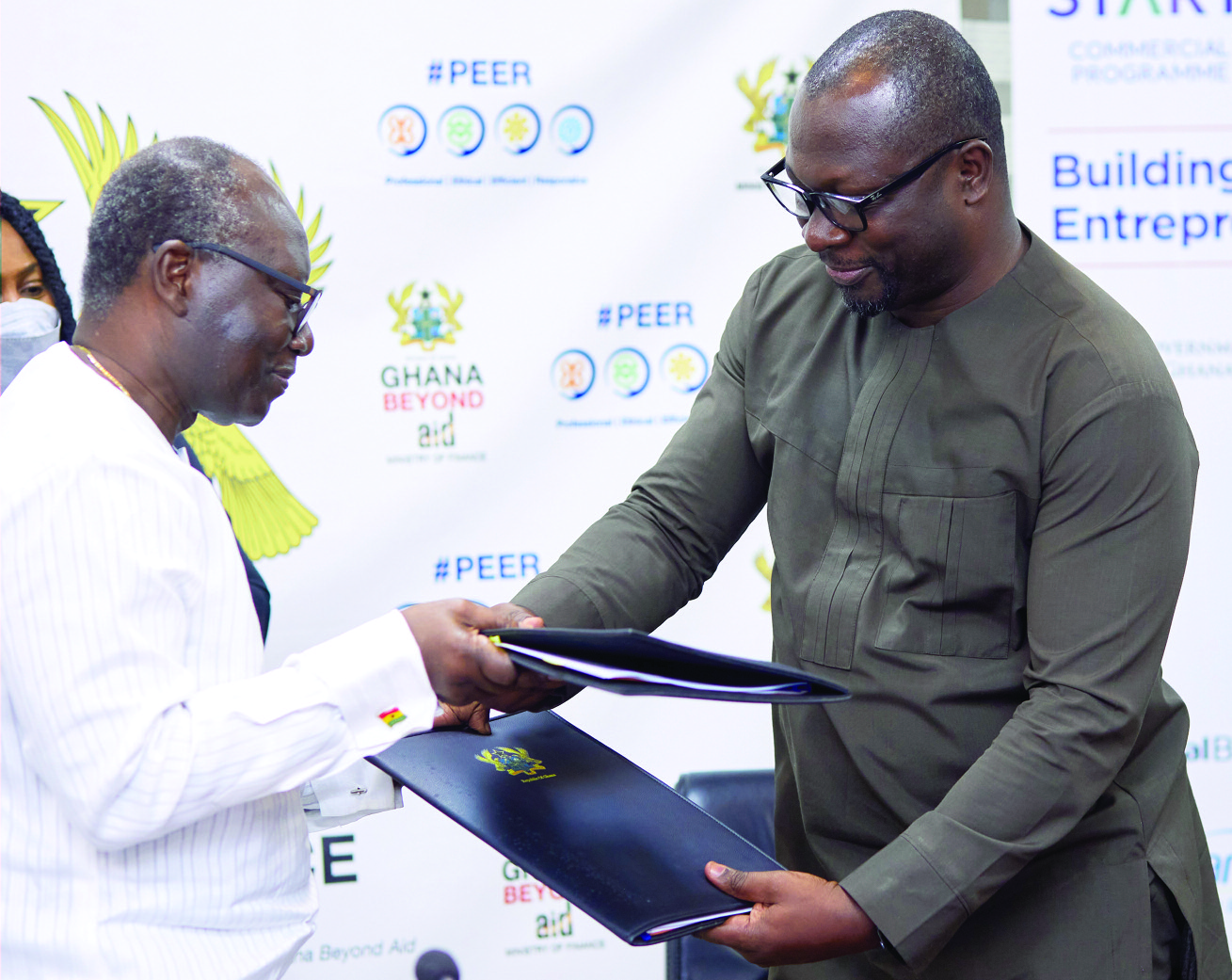 THE government has signed an agreement with 13 banks in the country to make available about GH¢5 billion to small and medium enterprises (SMEs) under the YouStart programme.

The funds are to be disbursed over the next three years under an initiative that aims to support the youth to start and sustain their own businesses.

The Finance Minister, Ken Ofori-Atta, and representatives of the partner financial institutions (PFIs) signed the various memoranda of understanding (MOU) last Tuesday to kickstart the implementation of the programme that was announced earlier this year.

The banks are to be coordinated by the Ghana Association of Bankers (GAB), an advocacy body for banks in the country.

Mr Ofori-Atta said the YouStart programme was the outcome of lessons learned from the Covid-19 pandemic.

“Fundamentally, we had to adopt this approach because the pandemic taught us that we must re-orient our approach towards structural transformation and react with a clear plan to ‘reap the benefits of our population dividend by building an entrepreneurial state,” he said

“This focus on building our young people's skills and entrepreneurial ‘instincts’ is an informed one,” Mr Ofori-Atta said.

The Finance Minister said data showed that about 50 per cent of local employers reported misalignment of or inadequacy of skills in the market, with Mckinsey also reporting that at least 50 per cent of new tertiary institution entrants enrolled in programmes in sectors with little or no growth in the labour market.

He said the Ghana Statistical Service (GSS) also suggested that the unemployment rate for those aged between 15 years and 35 years was 19.7 per cent.

“Even for those who are perceived to be working, 50 per cent of them are classified as under-employed.

“These statistics underscore the dire need to resolve this spectre of youth unemployment across our communities.

“Inevitably, this leads us to today's event, where the Government of Ghana, represented by the Ministry of Finance, will sign an agreement with the GAB and 13 leading banks for the YouStart commercial programme.

“Never in our history has there been a commitment of this size and scale,” he said.

Mr Ofori-Atta later explained in an interview that the banks had agreed to contribute a total of about ¢5 billion over the next three years to be disbursed to SMEs.

He was optimistic that the funding amount from the banks would create excitement among entrepreneurs, especially at a time when the country was engaging the International Monetary Fund (IMF) for a bailout programme.

He said the success of the programme would help the country to move beyond dependence on government and donors “into our own creative energies”.

Mr Ofori-Atta was optimistic that the programme would help to strengthen the links between education and job market stakeholders, provide access to finance, skills, and markets for young entrepreneurs and grow the capacity of the private sector to create jobs.

“Undoubtedly, we all are responsible for ensuring that YouStart becomes the primary vehicle for creating a million jobs over the next three years,” the minister said.

A Deputy Minister of Finance and Member of Parliament for the Ejisu Constituency in the Asante Region, Dr John Kumah, encouraged the banks to make the support and the funding available to SMEs nationwide.

He said the government’s target was for all interested businesses and individuals nationwide to be able to access it, hence the need for the banks to ensure that their branches outside Accra were also equipped to deliver the resources.

He said although the banks had been supporting SMEs and businesses in general on their own, the YouStart initiative was to enable them (government) to team up with the institutions to deliver higher results.

He said it was the first time that the government was announcing “a bold partnership project to team up with the financial institutions to deliberately build the next US-dollar millionaires.

The Chief Executive Officer of the GAB, Mr John Awuah, said the signing ceremony marked a turning point for the YouStart financing model.

He said the banks and the government had worked tirelessly to put the programme together and expressed the hope that the implementation would be smooth.