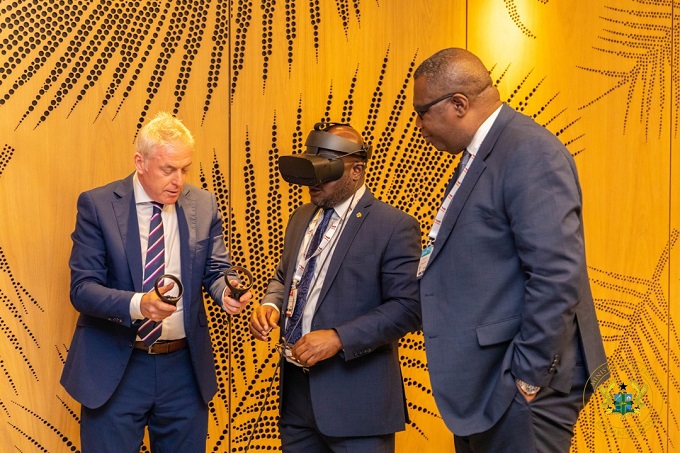 The Ministry of Energy has reiterated its call for collaborative efforts on the part of all players in the industry to ensure that the country’s local content and local participation drive as anchored on L.I. 2204 achieved its intended purpose.

The Deputy Minister for Energy, Mr Andrew Egyapa Mercer, made the call at the 2021 Africa Oil Week in Dubai, in the United Arab Emirates (UAE) during a meeting with Maersk Drilling, a drilling company with a presence in Ghana’s upstream petroleum industry.

He said with the government's commitment to the development of the industry backed by conscious efforts to ensure skills development and technology transfer through joint venture Ghanaian partnerships as required by law, a lot stands to be achieved.

For the current Energy Ministry led by Dr. Matthew Opoku Prempeh, he said, local content and local participation is an article of faith and therefore as a company operating in Ghana “we want you to intentionally pass on skills and technology to indigenous Ghanaian companies as the country strives to build capacity and knowhow in the upstream petroleum space”.

The Deputy Minister and MP for Sekondi who led a delegation to the 2021 Africa Oil Week also said there were ongoing conscious efforts by the government to develop industry-ready graduates and that with support from industry players the success story would be bigger.

For his part, the Chief Executive of the Petroleum Commission, Egbert Faibille Jnr., said as the upstream petroleum industry regulator, the doors of the commission were always open for discussions on skills development.

He said part of effort is to localize most of expatriate roles in the country’s upstream petroleum industry in furtherance of government Accelerated Oil and Gas Capacity Programme (AOGC) where more young graduates would be trained.

He said the fact remains that the backbone of every progressive society is its well-trained human capital. “It is therefore necessary for Ghanaians to be equipped with relevant skills and competencies to be able to actively participate in the oil and gas industry.”

“The localisation of job roles in Ghana’s upstream petroleum industry is an excellent initiative, which feeds into the government's overarching agenda to develop the country’s human resource base for increased participation in the industry.”

He said more of such initiatives are encouraged in the industry to develop the competencies of Ghanaians and to position them to take up key roles in the industry.

There were other discussions with industry, which centered on the progress and status of operations of Maersk Drilling in Ghana and opportunities available in the upstream sector for Maersk to guarantee their long stay in the country.

The delegation was given virtual reality (VR) tour of their offshore facility, above and beneath the sea, going as deep as over 3000ft.

Head of drilling solutions at Maersk Drilling, Mr Ben Pomford revealed that the company intends to bring some of the VR sets to Ghana for the country to have first-hand experience of underwater physics.

Africa Oil Week is an industry voice for exploration and production companies and other players and has been the global platform for stimulating deals and transactions across the African upstream.