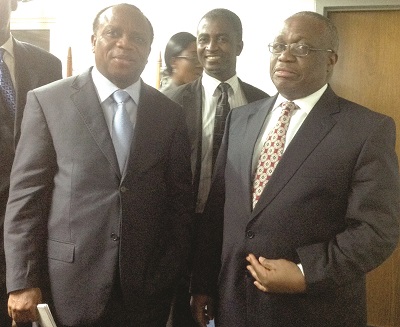 The Monetary Policy Committee (MPC) of the Bank of Ghana (BoG) has raised its policy rate to 16 per cent, despite admitting a squeeze in credit to the private sector.

The new rate, which is a 100 basis points higher than the initial 15 per cent, is expected to feed into the cost of funds from commercial banks and other financial institutions to businesses and other loan seekers nationwide.

The Governor of the BoG and Chairman of the MPC, Dr Henry Kofi Wampah, however, explained at a press briefing in Accra that the rise in the policy rate was to help contain the current risks associated with inflation.

"On balance, the committee held the view that risks to inflation were elevated and outweighed the risks to growth and, therefore, decided to increase the policy rate from 15 per cent to 16 per cent," he said.

The policy rate is the rate at which commercial banks borrow from the BoG. It thus serves as a key determinant of the rate at which commercial banks and other financial institutions lend to their customers, in that once it goes up, the cost of BoG funds rises and that mostly causes financial institutions to pass on the extra cost to their consumers by way of higher interest rates.

While admitting a slowdown in credit to the private sector in the first quarter of this year, Dr Wampah said risks associated with inflation — heightened exchange rate expectations, lingering fiscal pressures, the likelihood of full cost recovery in the energy sector, among others — necessitated the decision to hike the rate to help ease the pressures.

The Executive Director of the Centre for Policy Analysis (CEPA), Dr Joseph Abbey, said in an interview that his outfit shared in the BoG's concerns.

He explained that with inflation currently being above 10 per cent, the BoG needed to signal the market, through a rise in  the policy rate, its preparedness to stabilise the rate from climbing further.

"With the current state of inflation going beyond a single digit and exchange rate pressures also building, the MPC needed to step up its authority and show leadership that it is, indeed, worried about the situation and I think that is what the committee just did," Dr Abbey said.

In addition to the increase in the policy rate, the governor explained at the press briefing that the BoG would change its mode of presence in the interbank market "by introducing an 'informal standing facility' to operationalise policy decisions and enhance the transmission mechanism".

"These changes have steered the interbank rate within the policy corridor. It is expected that as the government restructures its debts and consolidates its fiscal operations, treasury bill rates will also fall within the corridor," he said, but added that previous measures introduced to reduce liquidity were still in place.