Apple 'among largest tax avoiders in US' - Senate committee 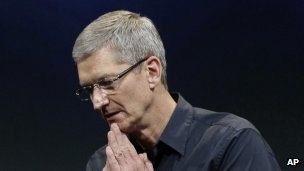 Apple has been accused of being "among America's largest tax avoiders". A Senate committee said Apple had used "a complex web of offshore entities" to avoid paying billions of dollars in US income taxes. But it said there was no indication the firm acted illegally.

Apple chief Tim Cook will go before the panel on Tuesday. In prepared testimony Apple said it did not use tax gimmicks.

The Irish Republic, home to three Apple subsidiaries, says it is not to blame for the firm's low tax payments.

The US Senate had said that Apple paid little or nothing on billions of dollars in profits placed in Irish subsidiaries.

"They are not issues that arise from the Irish taxation system," Deputy Prime Minister Eamon Gilmore told national broadcaster RTE when asked about the Senate committee report.

"They are issues that arise from the taxation systems in other jurisdictions and that is an issue that has to be addressed first of all in those jurisdictions."

The company says it is one of the largest taxpayers in the US, having paid $6bn in federal corporate income tax in the 2012 fiscal year.

The Senate Permanent Subcommittee on Investigations has been examining "methods employed by multinational corporations to shift profits offshore".

Some large firms in the US have come under fire for their reluctance to repatriate their foreign earnings as they could face a top tax rate of 35%.

US corporation tax is one of the highest in the world at 35%. However, companies typically pay far less, thanks to numerous deductions and exemptions.

In its report into Apple, committee chairman Carl Levin said: "Apple wasn't satisfied with shifting its profits to a low-tax offshore tax haven.

"Apple sought the Holy Grail of tax avoidance. It has created offshore entities holding tens of billions of dollars, while claiming to be tax resident nowhere."

Committee member John McCain said: "Apple claims to be the largest US corporate taxpayer, but by sheer size and scale, it is also among America's largest tax avoiders."

Apple said in its statement: "Apple does not move its intellectual property into offshore tax havens and use it to sell products back into the US in order to avoid US tax.

"It does not use revolving loans from foreign subsidiaries to fund its domestic operations; it does not hold money on a Caribbean island; and it does not have a bank account in the Cayman Islands."

It added that it had "substantial" foreign cash because it sells the majority of its products outside the US, and these foreign earnings were taxed in the jurisdictions where they were earned.

The committee has already questioned tech giants Microsoft and Hewlett-Packard over their tax practices.

In September, the committee accused the two firms of using places such as the Cayman Islands, so they do not have to pay US taxes, saying their methods ranged from "egregious to dubious validity". Both companies deny any wrongdoing.

Five of the top 10 companies with the biggest offshore cash balances are in the technology sector.

Apple said it wanted to see legislation that "dramatically simplifies" the US corporate tax system.

It believes reform should be "revenue neutral, eliminate all corporate tax expenditures, lower corporate income tax rates, and implement a reasonable tax on foreign earnings that allows free movement of capital back to the US".

It said that, though these changes may increase its own taxes, it would not be opposed to such a result "if it occurs in the context of an overall improvement in efficiency, flexibility and competitiveness".

It said the changes would stimulate job creation in the US, increase domestic investment and promote economic growth.

Apple drew criticism three weeks ago when it sold $17bn in bonds to raise cash to fund payouts to shareholders, rather than repatriating some of its cash reserves, which would be taxed in the US.

The move saved the company an estimated $9.2bn in taxes.

In its prepared testimony, Apple said that the move was in its shareholders' best interests.

While critics argue that companies shifting their profits overseas is a huge tax avoidance scheme, others want lower rates to encourage firms to invest in the US.

Last week Cisco chief executive John Chambers said his company was likely to invest more overseas if US tax laws were not modified.

"I prefer to have the majority of my employees here in America. That's the right decision for us, but if we can't bring our cash back, we're going to grow dramatically faster overseas in terms of job placements," he told CNBC.

"I think this is something our country has to fix."

The US is not the only country trying to ensure companies pay their "fair share" of taxes.

UK Prime Minister David Cameron has called for countries to work together to clamp down on tax avoidance.

In the UK, Google, Starbucks and Amazon are among several large companies to face criticism over the amount of corporation tax they pay.

Despite making sales of hundreds of millions of pounds, they reported small profits or even losses in the UK after shifting their earnings to overseas operations.

On Sunday, Google's executive chairman Eric Schmidt defended his company, saying it had "always aspired to do the right thing", but added that "international tax law could almost certainly benefit from reform".