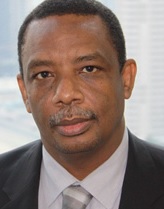 The Chief Executive Officer of Kasapa Telecom Limited, operators of the Expresso mobile/data service in the country, Mr El-Amir Ahmed El-Amir, has downplayed the impact of the declining market share of the company’s GSM services among competition.

According to him, the focus of the company is to continuously lead in quality data service delivery in the country at high speed and at competitive prices.

Mr El-Amir said this in an interview with the Graphic Business shortly after a ceremony to commemorate the landing of the fifth submarine fibre optic cable in the country.

It is meant to increase the country’s bandwidth capacity from 7.2 terabytes held by Glo One; Main One, Vodafone SAT 3 and West Africa Cables (WACS) held by MTN, to 12.3 terabytes with the addition of 5.1 terabytes from Africa Coast To Europe (ACE).

The $700 million cable which was landed by ACE, a consortium of 16 operators in the telecoms industry including Expresso in Ghana, is 17,000 kilometres long.
ACE submarine communications cable is a cable system along the west coast of Africa between France and South Africa managed by a consortium of 16 operators and administrations headed by France Telecom and Orange.

The cable was manufactured by Alcatel Submarine Networks (ASN) and was laid by ships from ASN and France Telecom Marine.

The first phase of the fiber optic cable was put in service on December 15, 2012, with an official inauguration ceremony held on December 19, 2012 in Banjul, The Gambia.

The ACE Cable will eventually connect 23 countries, either directly for coastal countries or through land links for landlocked countries, like Mali and Niger and it will be the first international submarine cable to land in Equatorial Guinea, The Gambia, Guinea, Liberia, Mauritania, Sao Tome and Principe and Sierra Leone.

“ACE is not for voice but it is going to be coming to Ghana to provide better connectivity always”, he said.

Expresso market share as at the end of February this year stood at 0.62 per cent from a total of 163,762 at the end of the period under review.

In December the previous year, the company which fortunes in competition as far as voice is concerned is suffering a major setback, closed with 165,863 subscribers.

But Mr El Amir said the company’s license is more focused at getting the company to provide data services and not voice.

“We are not actually having any strategy to focus on voice services the same way as the GSM players are doing now; Our focus is to deliver high quality services and to support the penetration of data services in the Ghana market” he said.

He said with the ACE cable the company is poised to help more in providing high capacity, high connectivity, high quality and diversity for the internet connectivity in the Ghana market.

Mr El Amir said the company intends to create great opportunity for all telecos and the Internet Service providers (ISPs) in the country.

“We are providing the backbone connectivity and we expect strong partnership with the partners who will provide the last mile connectivity to the customer so that it is our focus to be the main driver to provide nation-wide connectivity.

About the impact of the ACE fibre on prices of bandwidth in the country, he said replied that he did not know what the prices will be yet but noted that “we are sure to provide competitive prices. The cables are there but we have a new technology to enable us provide the quality deserved at competitive prices”.