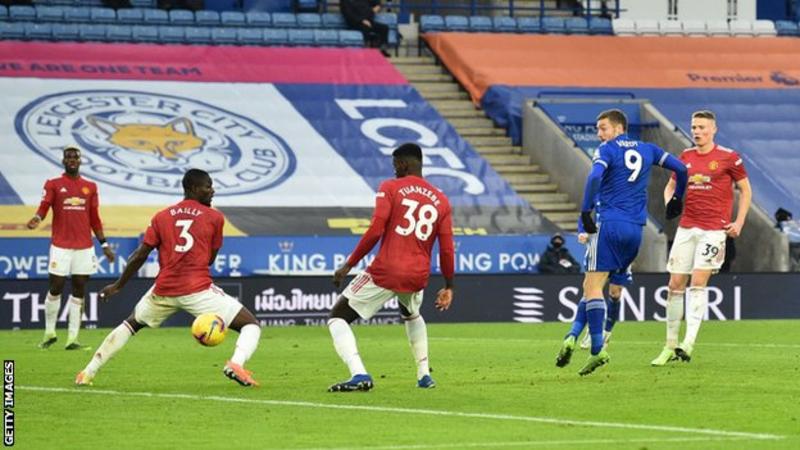 Jamie Vardy had a quiet afternoon before he played a big role in Leicester's late equaliser
30.5k Shares

Leicester City manager Brendan Rodgers said his side showed the personality of a "huge club" as they came from behind twice to earn a point against Manchester United.

Axel Tuanzebe diverted a close-range effort from Jamie Vardy - who had an otherwise quiet afternoon - into his own net in the 85th minute to deny the visitors a record-equalling 11th consecutive away win in the Premier League.

Bruno Fernandes had given United the lead with just over 10 minutes left when he latched on to substitute Edinson Cavani's through ball and finished past Kasper Schmeichel.

Marcus Rashford opened the scoring when he got on the end of Fernandes' pass to slide in his 50th top-flight goal, before Harvey Barnes hit a fine first-half equaliser.

The Foxes remain second in the table and Rodgers says his side's resilience shows they can "compete at the highest level".

"We showed lots of potential last year but with more coaching time and more confidence the players will improve," said Rodgers, whose side have already beaten Manchester City, Tottenham and Arsenal this season.

"We're nowhere near in terms of budget but from a football perspective we were competitive."

The result at King Power Stadium ended United's 10-match winning league run on the road - one short of the record set by Chelsea in 2008.

"We gave them lots of problems and, looking at it, we had some real authority in the game," added Rodgers.

"It was the very least we deserved. We showed real quality and showed we can compete at the level against a team who had won every game away from home."

Both sides retained their pre-match position in the table before Saturday's other fixtures, with Leicester three points behind leaders Liverpool and one ahead of third-placed United.

Boxing Day honours even
The day after Christmas is renowned for turkey sandwiches and Premier League football, and the opening match of the festive schedule served up a treat.

Both managers acknowledged their opponents' counter-attacking threat pre-match, and it did not take long for the first chance to come.

Rashford should have given Ole Gunnar Solskjaer's United side the lead in the second minute when Fernandes clipped the ball towards the back post, but the unmarked England forward headed wastefully over the bar.

Just a minute later, the Foxes surged down the other end and the impressive James Justin fired in a fierce cross for Vardy, but Victor Lindelof was able to clear the danger.

That theme continued for the rest of the contest as the teams who started the day second and third in the table ultimately cancelled each other out.

Rodgers' hosts had slightly more possession but United, who have the best away record in the division, managed to produce one more shot.

Half-century up for Rashford

Rashford has led by example off the pitch this year, having successfully campaigned for the government to extend free school meals during the coronavirus pandemic and winning a special BBC Sports Personality award.

The 23-year-old has also been exceptional on the pitch and became the third-youngest United player to reach 50 Premier League goals, behind Wayne Rooney and Cristiano Ronaldo. However, he will surely be disappointed to have left Leicester without the match ball.

He recovered well from his bad early miss to collect Fernandes' pass and slide the opener past Schmeichel.

But the Foxes keeper came out on top in their next duel, saving superbly when Rashford was clean through.

Only Fernandes has scored more goals for the club than Rashford's six this season, but the United academy graduate has to be more clinical to deliver the biggest prizes to Old Trafford and enjoy the successes of Rooney and Ronaldo.

'Close, but not close enough' - what they said
Leicester City manager Rodgers, speaking to BBC Sport: "We showed the mentality to come back. I thought some of our attacking play was very good. You are playing against a team that is so quick on the counter-attack but I felt we counter-pressed very well.

"Today was another sign for us of improvement where if you can't win it you make sure you don't lose it, so I am pleased with the mentality."

On Vardy: "I thought he was outstanding today. The space he creates with his movement and running. I am delighted for the team, delighted for Jamie and it was a good game of football."

Manchester United boss Solskjaer, speaking to BBC Sport: "When there is 10 minutes to go and we scored a goal you think: 'Get on the ball and see the game out.' But it wasn't to be. We have come back so many times from losing positions to win, so we know the feeling from the other side.

"Marcus Rashford is always lively. He is always there or thereabouts with scoring goals. Good finish and he knows he had a couple of other chances, but that is football for you.

"Victor Lindelof has a back problem and it seems like he has aggravated it today. We had an early kick-off today and that gives us a few more hours to prepare for the next game.

"We knew today was going to be a difficult one. It was close to a win but not close enough."

United happiest on the road - the stats