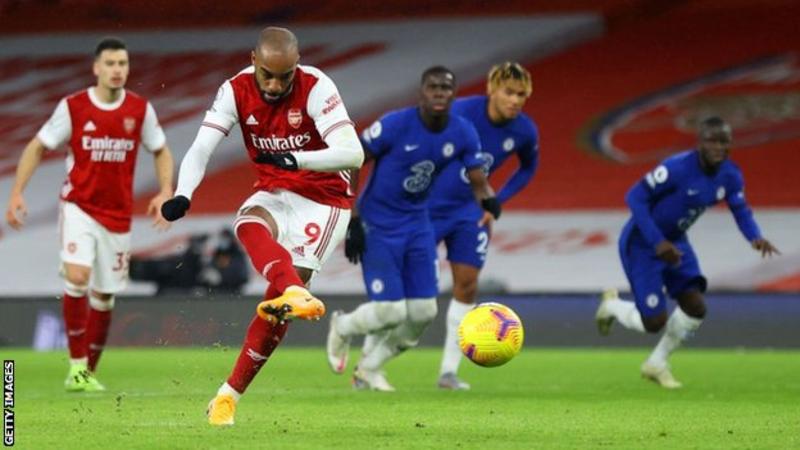 Lacazette is Arsenal's top goalscorer in all competitions this season with six goals
30.5k Shares

A rejuvenated Arsenal recorded an important victory over Chelsea to end their seven-game run without a win in the Premier League and ease the pressure on boss Mikel Arteta.

Alexandre Lacazette sent goalkeeper Edouard Mendy the wrong way from the penalty spot and Granit Xhaka curled in a superb free-kick 10 minutes later to put Arteta's side in control.

Bukayo Saka's cross then dropped into the top corner early in the second half to put the game beyond the visitors.

Tammy Abraham scored from close range to make it a nervy final five minutes for the hosts and Jorginho then saw his weak penalty saved by Bernd Leno.

But it was an otherwise lacklustre performance by Frank Lampard's side, who missed the chance to go second.

It was a well-deserved victory for Arsenal, who climb to 14th and will hope any talk of a relegation battle is now behind them.

Arteta celebrates anniversary in style
It has been an arduous couple of months between Premier League wins for Arsenal boss Arteta but, on the first anniversary of his first game in charge of the Gunners, his side delivered arguably one of the most important victories of the Spaniard's tenure.

Five months ago, Arsenal and Arteta were celebrating winning the FA Cup against their London rivals, only to watch the title-chasing Blues invest £200m on new players while the Gunners spent Christmas in their lowest league position since 1982.

Arteta made six changes to the side beaten by Everton last time out in the league and trusted in youth with 19-year-old pair Saka and Gabriel Martinelli and 20-year-old Emile Smith Rowe.

He was rewarded with renewed energy and, despite there appearing to be minimal contact when Reece James fouled Kieran Tierney in the box, Lacazette made no mistake from the spot to deservedly put the hosts in front.

Xhaka, back in the side following suspension, found the top corner with his free-kick soon after and when Saka's attempted cross dropped over Chelsea goalkeeper Mendy into the net, Arteta must have felt his luck was changing.

Martinelli forced Mendy into a low save after a smart move down Arsenal's left and the Blues stopper was relieved when Lacazette failed to capitalise on his mistake.

Mohamed Elneny struck the bar as Arsenal threatened to add to their tally before Chelsea's late reprieve, but the Gunners held on for a first win in the Premier League since they beat Manchester United at Old Trafford almost two months ago.

New West Brom boss Sam Allardyce suggested the Gunners are one of their relegation rivals this week but Arteta will hope this victory proves the catalyst to propel them up the table.

Chelsea struggle to break down Gunners
Lampard said beforehand he did not want to let Arsenal off this "moment" and will be furious that his Chelsea side did exactly that.

Mason Mount hit the post with a free-kick after the dangerous Christian Pulisic was fouled, but the Blues otherwise struggled to break Arsenal down in the first half.

One of the concerns for Lampard will be Timo Werner's failure to score in his past 10 games in all competitions, his longest run without a goal for four years.

The German forward was taken off at half-time as Lampard brought on Jorginho and Callum Hudson-Odoi in a bid to inject some life into his side, but Arsenal's third goal 10 minutes into the second half quashed any hopes of a comeback.

It was only in the final few minutes that Chelsea really threatened, though Abraham's chested effort was initially ruled out for offside before being awarded by the video assistant referee.

Had Jorginho netted from the spot moments later it may have been different, but Chelsea will head back across London disappointed with their performance at Emirates Stadium.

"From the first whistle you could see the team had the energy and willingness to come out and win the game.

"The spirit before the game was really positive, they really wanted it. I am pleased for the players and for the supporters, We have let them down for many weeks so it was a good day to give them something to cheer about."

Chelsea boss Frank Lampard told BBC Sport: "In the second half we showed some urgency but it was too late. The first half we gave ourselves too much to do, we were very poor. You can't lack energy and desire in the Premier League and we did.

"You can prepare as well as you want but if you turn up like that that's another thing. It's in the mind.

"If you perform below par things go against you like the Saka goal. That's life. On another day we could have scored the penalty and come back but it's not a day for us.

"The teams that win, win, win relentlessly weren't winning two or three years ago. We are not there yet, that's clear. I felt it when we are on our long unbeaten run and I feel it now. We got a lot wrong today."

Lacazette leads the way - the stats

What's next?
Chelsea host Aston Villa in the Premier League on Monday (17:30 GMT), before Arsenal visit Brighton on Tuesday (18:00).