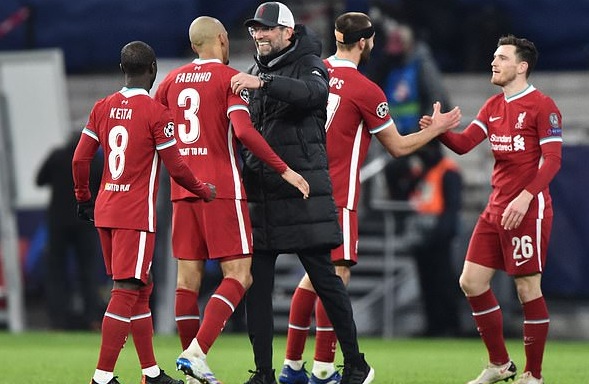 Liverpool players celebrating their victory over RB Leipzig at the Round of 16 stage
30.5k Shares

Liverpool face a rematch of their 2018 Champions League final with Real Madrid after being drawn together in the quarter-finals of this year’s competition.

Manchester City will get a first-hand look at transfer target Erling Haaland after being drawn against Borussia Dortmund, while Chelsea have been handed a tie against Porto.

Paris Saint-Germain and Bayern Munich meet in a re-run of last year’s showpiece in Lisbon to complete the draw.

Liverpool will be hoping to maintain their fine European form against Zinedine Zidane’s men, while also carrying out a spot of revenge.

Jurgen Klopp’s side lost the final in 2018 when Gareth Bale scored twice late on to secure the trophy for the Spaniards. The match also went down in infamy for Sergio Ramos’s challenge that ended Mohamed Salah’s participation in the showpiece.

Erling Haaland, meanwhile, is one of the hottest properties in Europe, having scored 31 goals in 30 appearances across all competitions this season. City are one of many teams that have been linked with the explosive Norwegian to date.

The tie will also see Ilkay Gundogan go up against his old club. The Germany international moved to the Etihad in 2016 as is enjoying one of his most productive seasons to date under Pep Guardiola, scoring 12 times in 23 appearances.

Chelsea will be the happiest of the English contingent left in the competition having drawn the reigning Portuguese champions.

Sergio Conceicao’s men squeezed past Juventus in the previous round after extra time. They are current sat second in Portugal’s top flight, 10 points behind leaders Sporting.

The pair have met eight times in the Champions League previously – most recently in the 2015 group stages – with Chelsea having lost just twice.

The draw for the semi-finals was also made, with Liverpool and Chelsea set to meet in the last four should they emerge victorious.

City would face a semi-final against either Guardiola’s old club Bayern or a date with Paris Saint-Germain.

All quarter-final first leg ties are scheduled for April 6 and 7, while the return legs will be played the following week on April 13 and 14.