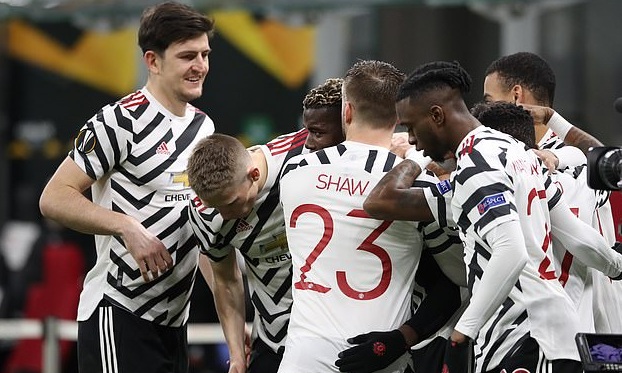 Manchester United will be looking to make the final of the Euopa League
30.5k Shares

Manchester United will face European debutants Granada for a place in the semi-finals of the Europa League, while Arsenal will take on Slavia Prague.

Ole Gunnar Solskjaer's men have been rewarded for their hard-fought last-16 success against AC Milan with a tie against the Spanish newcomers, who squeezed past the Norwegian's former club Molde in the previous round.

They had previously come through a challenging tie with Serie A side Napoli beforehand.

Granada boast a couple of players familiar with playing the Red Devils, with former Tottenham striker Roberto Soldado and Chelsea loanee Kenedy among the key members of Diego Martinez's squad.

Arsenal meanwhile, take on Slavia Prague – who have already knocked out two British sides in this year's competition.

The Czech outfit beat Brendan Rodgers' Leicester City in the round of 32, before seeing of Steven Gerrard's Rangers on Thursday night, in match marred by serious allegations of racism against defender Ondrej Kudela.

Arsenal made it through after holding out at home to Olympiacos, sealing their place in the last eight thanks to a 3-2 aggregate win, despite losing 1-0 at home on Thursday night.

Elsewhere, Tottenham's conquerors Dinamo Zagreb have been rewarded for their herculean effort with a tie against Spanish side Villarreal.

Ajax will face Roma over two legs, both having been Champions League finalists in the last three years.

In the semi-final draw, the two English sides have been kept apart, with United set to face either Ajax or Roma.

Arsenal could be set for a reunion with former boss Unai Emery should they meet Villarreal in the last four.