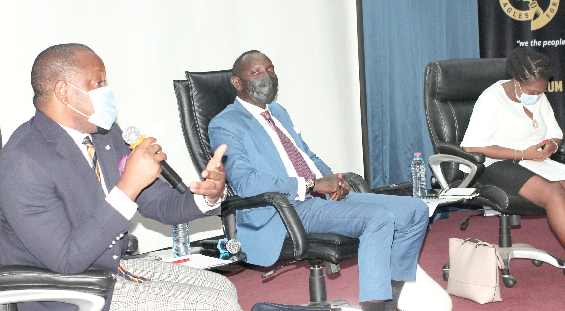 Some private legal practitioners have called for what they described as “an upgrade” of the 1992 Constitution to reflect current issues confronting the country.

Speaking at a maiden Eagles Forum Dialogue series held in Accra last Wednesday, the practitioners, who were panellists at the forum, said current issues confronting the country included how to achieve stable economic growth and development, as well as to what extent the constitution has helped in consolidating democracy and the decentralisation process.

The main speaker for the event was Mr. Justice Srem-Sai, a constitutional lawyer and lecturer at the Ghana Institute of Management and Public Administration (GIMPA) Law School who set the tone for the discussions.

The Eagles Forum is a group that believes in social democratic principles. It is also a group of professionals of varied backgrounds that seeks to promote social justice, good governance, engage citizens and ensure responsible private enterprise through research public advocacy and social activism, among others.

The purpose of the dialogue, which was on the topic: “1992 Republican Constitution, time for an upgrade?” was to help provide a non-partisan platform for stimulating public discussion on topical subjects and provide a foundation to develop policy proposals for broader civil society advocacy with government and political parties.

The panellists noted that the framers of the constitution dwelt on producing a legal framework that would help stabilise the country politically, which to a large extent had been achieved.

However, they observed that currently, with the growing needs and challenges facing the country, there was the need to upgrade the constitution.

Ms. Annan suggested that before an upgrade can be achieved, a lot would depend on the attitudinal change among the people.

“The prejudices of everyone then was to develop a document that will bring some form of political stability, ”Ms. Annan further explained.

She entreated Ghanaians to ask themselves whether the constitution had helped to give them “a richer and fulfilled life".

“We, therefore, need to have an upgrade of the constitution to ensure that the citizenry participate in governance to a level where the powers of the executive is not protected to the neglect of the citizenry," Ms. Annan stated.

For his part, Mr. Apanga was emphatic that the country's decentralisation process had failed because it seemed to be “a cosmetic system put in place but it is not responding to the needs of the people".

Mr. Srem-Sai proposed a system whereby civil society organisations(CSOs) would be allowed to mobilise people and create a platform for them to directly have a say as to whether certain areas in the constitution needed to be upgraded.

The people, he noted, could be made to append their signatures directly to what exactly they wanted to be changed in the Constitution.