Mahama has no solutions to Ghana's problems - NPP 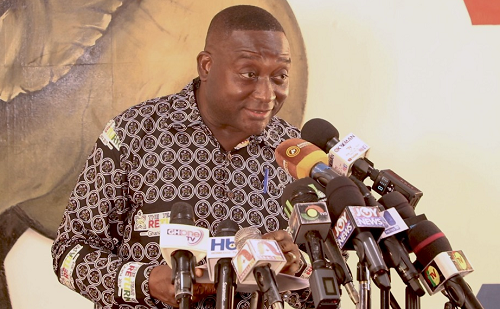 According to the party, former President Mahama has been touring the country under the guise of thanking Ghanaians for his defeat in the 2020 election and creating the impression that he has the solutions to the country's problems.

The Communications Director of the NPP, Yaw Buaben Asamoa at a press conference on Thursday afternoon, November 11, 2021, said former President Mahama was just desperate to rule the country again, hence making false claims of having all the answers to the country’s problems.

He said when Mr Mahama had the chance to rule the country, he messed up the country's economy, and therefore has no moral right to be claiming that he has solutions to the country’s problems.

For him, former President Mahama was only throwing tantrums that he would be able to improve the country's economy if given the mandate again in the 2024 elections just for him to satisfy his personal ambitions.

He said Mr Mahama lost the 2016 election due to his mismanagement of the country's economy which resulted in the worsening plight of the ordinary Ghanaian and that Mr Mahama has nothing to offer except to draw back the country’s progress if Ghanaians mistakenly give him power again.

He expressed shock that whereas Mr Mahama was claiming to have solutions to the country's unemployment situation during his tours and lectures, it was during his tenure that the country witnessed the formation of the unemployment graduates association.

Mr Asamoa said even though Mr Mahama claimed to have the interest of the poor at heart, he never introduced any pro-poor policy or intervention during his administration.

He said former President Mahama and his opposition NDC had been fighting all social intervention policies introduced under the various NPP administrations, including the free SHS, Livelihood Empowerment Against Poverty (LEAP), and National Health Insurance Scheme.

He was of the view that Mr Mahama and his team were only scheming to get power in order to continue their mismanagement of the country.

The NPP's Director of Communications said it was laughable that former President Mahama would be talking about solutions to corruption in the country.

He said Mr Mahama’s words were contradictory to his own actions and that Mr Mahama “was a walking embodiment of corruption."

Mr Asamoa also chastised former President Mr Mahama for crying foul over projects started under his administration that had been abandoned by the ruling NPP government.

For him, it was untrue that projects started by Mr Mahama had been abandoned, saying Mahama has not changed from his incompetence even in opposition.