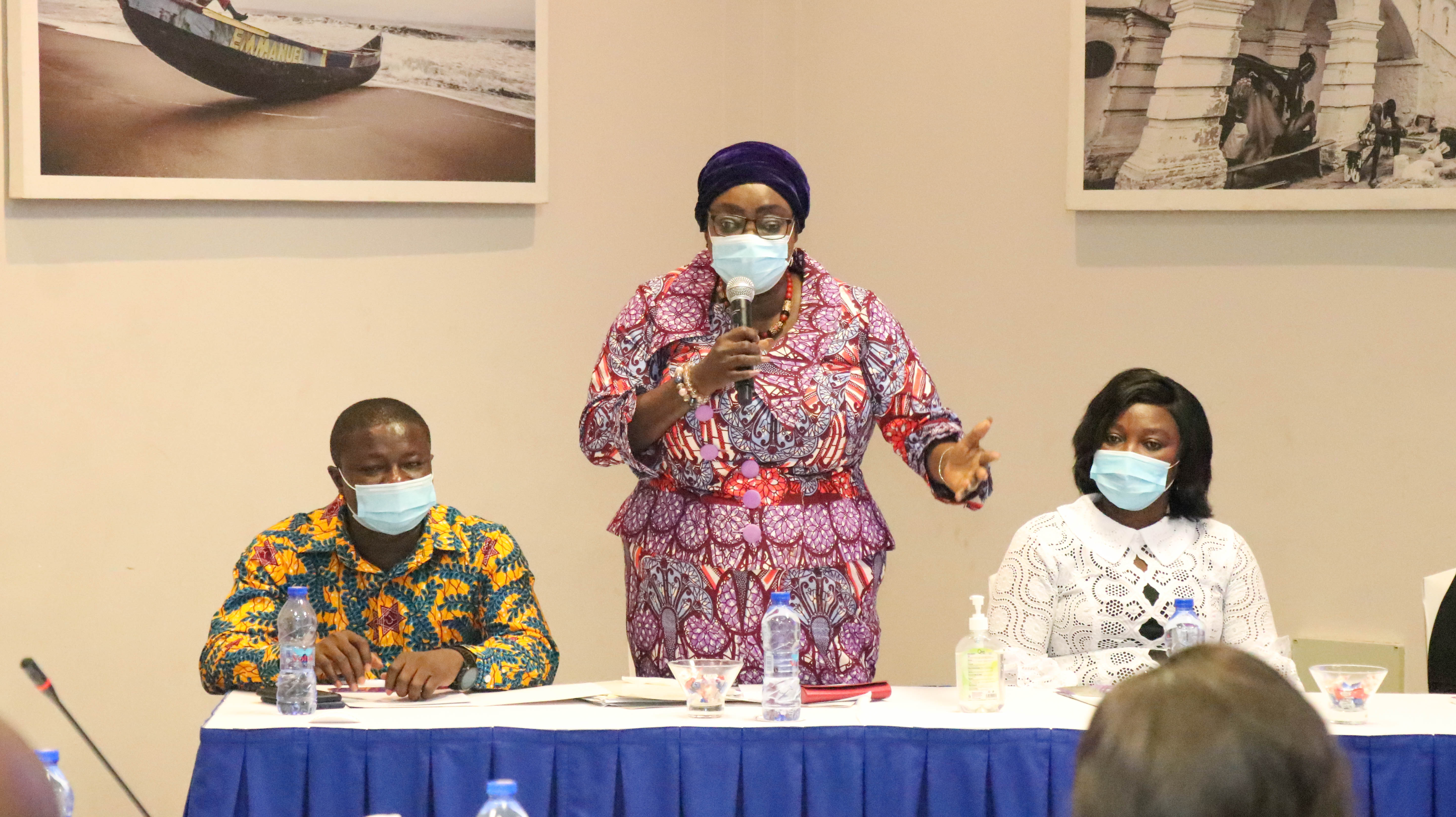 Ms Freda Prempeh, Minister for Works and Housing (standing) addressing the MPs during the engagement. Those with her are Mr. Elvis Morris Donkor, MP for Abura-Asebu-Kwamankese (left) and Ms. Justina Marigold Assan, Central Regional Minister, (right)

The Parliamentary Caucus on Population and Development and the Parliamentary Youth Forum have expressed concern about the high incidence of teenage pregnancy and stressed the need for the country to promulgate laws to curb the menace.

The Members of Parliament (MPs) indicated that the statistics released by the Ghana Health Service that 2,865 girls between10 to 14 years and 107,023 girls aged 15 to 19 got pregnant in 2020 was worrying and called for the urgent enactment of laws to deal with teenage pregnancy.

They particularly noted that to have 2,865 girls between 10 to 14 years getting pregnant when the country has a law that says having sex with a girl under 16 of age is defilement meant that the perpetrators have not been made to face the legal sanctions.

The legislators expressed these concerns at a day’s engagement on teenage pregnancy, family planning and sexual and gender based violence held in Cape Coast in the Central Region.

The engagement, organised by the United Nations Population Fund (UNFPA) formed part of a three-day event to create a platform for a solution-based dialogue among the parliamentarians and adolescent girls and boys on a rapid response to teenage pregnancy and the role of key stakeholders.

In his submission, the MP for Tema Central, Mr. Yves Nii-NoiHanson-Nortey proposed that any legislation to reduce teenage pregnancy, should have a provision that would hold parents whose teenage daughters become pregnant accountable.

According to him, it was clear that lack of parental control and guidance was a key factor in the high rate of teenage pregnancies being recorded in the country.

In a presentation on the situation of adolescent sexual and reproductive health, Mrs. Gifty Ben-Aryee, Programmes Head, Adolescent Health and Development of the Family Health Division of the Ghana Health Service said about 14.3 per cent of adolescents in the country have begun child bearing.

Mrs. Ben-Aryee said the Adolescent Health and Development programme provides accurate health information and sexual and reproductive health interventions for adolescents and appealed to the MPs to use their influence in society to support the effort to reduce teenage pregnancy in the country.

The Minister for Works and Housing and MP for Tano North in the Ahafo Region, Ms Freda Prempeh urged her colleagues to take a lead role in the advocacy to curb teenage pregnancy in the country.

She further called on them to brainstorm on how to collaborate with other stakeholders to tackle issues like, poverty, poor parental control and peer pressure, which are the factors that lead to unwanted pregnancies among teenagers.

Ms Prempeh emphasised that it was time for the legislators to focus on sanctioning the perpetrators who impregnate teenagers to serve as a deterrent to others.

The MP for Abura-Asebu-Kwamankese, Mr. Elvis Morris Donkor gave the assurance that the Population and Development Caucus and the Young Parliamentarians Forum, made up of MPs, aged 45 years and younger were committed to addressing the issue of teenage pregnancy.

The Central Regional Minister, Ms. Justina Marigold Assan advised the Population and Development Caucus to spearhead a dialogue with the various stakeholders on how to effectively promote adolescent sexual reproductive issues as a means to curb teenage pregnancies.

A Programme Analyst with the UNFPA, Dr. Doris MawuseAglobitse said the UN agency was worried about the high rate of adolescent pregnancies because it was clear that most of the pregnancies were unintended.

We are worried because we know that all the adolescent pregnancies are unintended pregnancies. “Majority might result in unsafe child births and the dreams of these young people will not be fulfilled,” she added

Dr Aglobitse reiterated that the mission of UNFPA mission was to deliver a world where every pregnancy is wanted, every childbirth is safe and every young person's potential is fulfilled, adding that the MPs were ‘agents of change’, with social and moral capital to advance issues affecting adolescent girls.