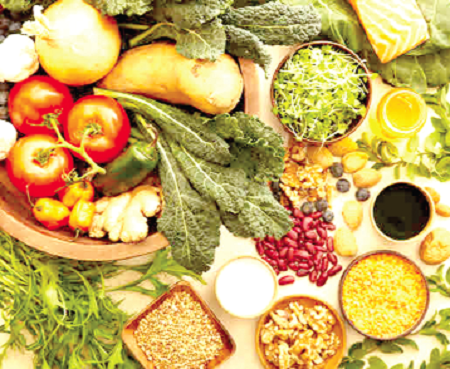 Herbal medicine comes from the plant kingdom. The human body, according to the Bible, was also made from the soil/earth and disintegrates into the soil when one dies.

The soil or the earth provides everything the human body needs to survive, including food, medicine, clothing and shelter.

Plants are living things, they absorb carbon dioxide and produce oxygen, while humans take in oxygen and produce carbon dioxide. God in his own wisdom, who created both man and plant, has stated categorically in the Bible that eats plants and use them to heal diseases.

Plants that grow in the soil are affected sometimes by viruses, bacteria, parasites, fungal and excessive oxygen, as their own by-products.

Plants produce primary metabolites, which are carbohydrates, fats and oil, and proteins, which are the food for men to eat and survive.

In order for plants to survive in the hostile environments, they produce secondary metabolites called phytochemicals, which have antioxidant, antiviral, antifungal, antibacterial, antiparasitic and many other such properties.

Incidentally, man lives in the same hostile environment, which causes cancer, endocrine disorders and all other ailments and sufferings.

The phytochemicals produced by the plants are perfect solutions to ailments. Much of early medicine relied on the prescription of specific plants and herbs for healing, a practice still supported by contemporary research.

Naturally occurring compounds, known as phytochemicals (phyto means plant in Greek) are thought to be largely responsible for the protective health benefits of these plant-based foods and beverages, beyond those conferred by their vitamin and mineral contents.

These phytochemicals, which are part of a large and varied group of chemical compounds, are also responsible for the colour, flavour and odour of plant foods, such as, blueberries’ dark hue, tomatoes, pepper, broccoli’s bitter taste and garlic’s pungent odour.

They are classified according to their chemical structures and functional properties.  Phytochemicals include compounds, such as salicylates, phytosterols, saponins, glucosinolates, polyphenols, protease inhibitors, monoterpenes, phytoestrogens, sulphides, terpenes, lectins, alkaloids, tannins, flavonoids and many more.

Research on specific phytochemicals in foods and their effects on disease risk is limited but there’s enough evidence — mostly from looking at the association between foods rich in phytochemicals and disease risk — to strongly suggest that consuming foods and beverages rich in these compounds may help prevent disease.

There’s evidence to suggest that consuming foods rich in phytochemicals may reduce the risk of cardiovascular disease.

One meta-analysis found that increasing fruit and vegetable consumption from fewer than three to more than five servings per day was associated with a 17 per cent reduction in risk.

Another meta-analysis suggested that the risk of coronary heart disease would decrease by four per cent for each portion per day of fruits and vegetables added to the diet.

There’s a wide range of benefits associated with the phytochemical content of these foods and beverages, including the lowering blood pressure, reducing inflammation, increasing HDL cholesterol, while decreasing LDL oxidation, dilating blood vessels, and decreasing the tendency of the blood to form clots.

Cocoa was found to improve endothelial function by dilating blood vessels; it was more effective among those above 50.

A meta-analysis and a systematic examination of prospective cohort studies and randomised controlled trials found that an average of 2.5 to five servings of whole grains per day was associated with a 21 per cent lower risk of cardiovascular disease compared with consuming fewer than 0.2 servings per day.

The range of phytochemicals, including anthocyanins, phytosterols, phenolic acids, lignans, and carotenoids, that are present in wheat, rye, oats, rice, and other grains is believed to contribute to these cardioprotective effects.

The consumption of fruits, vegetables, and whole grains, as well as dietary patterns, such as, the Mediterranean diet that emphasises these foods, have been associated with a reduced risk of several types of cancer, including breast, lung and colon.

A systematic review of 25 prospective studies found that an increase of three servings per day of whole grains was associated with a 17 per cent lower risk of colorectal cancer.

But not all studies on fruit, vegetable and whole grain consumption have found the same reduction in risk.

The consumption of cruciferous vegetables such as broccoli, cabbage and cauliflower has been associated with a decreased risk of prostate, lung, breast and colon cancers.

Research suggests that phytochemical-rich foods may directly decrease the risk of type 2 diabetes, most likely by reducing inflammation and improving insulin sensitivity, and indirectly by preventing weight gain, the most important risk factor of the disease.

Some studies have found that a reduced risk was strongest with the consumption of green leafy vegetables, which are rich sources of phytochemicals.

Phytochemicals may provide protection against neurodegenerative diseases such as Alzheimer’s and Parkinson’s.

Research suggests that phytochemicals, such as capsaicin (found in red pepper), curcumin (found in the spice turmeric), epigallocatechin gallate (a catechin in tea known as EGCG), and resveratrol (found in grapes, wine, and peanuts) may have neuroprotective effects.

Flavonoids, in general, are thought to help reverse age-related declines in cognitive function by increasing the number of connections among neurons and improving blood flow to the brain, which protects vulnerable neurons and enhances the functioning of existing neurons.

The consumption of flavonoid-rich foods, such as, berries and cocoa throughout life may hold the potential to limit, prevent, or reverse normal or abnormal deterioration in cognitive function in the aging brain.

Researchers have found that phytochemicals have the potential to stimulate the immune system, prevent toxic substances in the diet from becoming carcinogenic, reduce inflammation, prevent DNA damage and aid DNA repair.

In addition, the likely health effects of phytochemicals that researchers haven’t yet recognised.

Laboratory research has focused on the antioxidant function of phytochemicals.

However, their antioxidant activity is reduced in the body during metabolism, and the levels present in blood and tissue are fleeting and quite low.

In addition to being rich sources of phytochemicals, plant foods also are sources of fiber, vitamins, and minerals whose mechanisms have been more clearly elucidated.

But identifying which individual compounds are responsible for the benefits associated with phytochemical-rich foods is difficult, if not impossible, because of the interactions that occur with vitamins, minerals, and fiber, as well as among the phytochemicals themselves.

The unique combination of these compounds may be the key to reduced disease risk, but that formula hasn’t yet been identified and tested.

The writer is a pharmacognosist, Chief Medical Officer and CEO of the Medi Moses Group of Companies