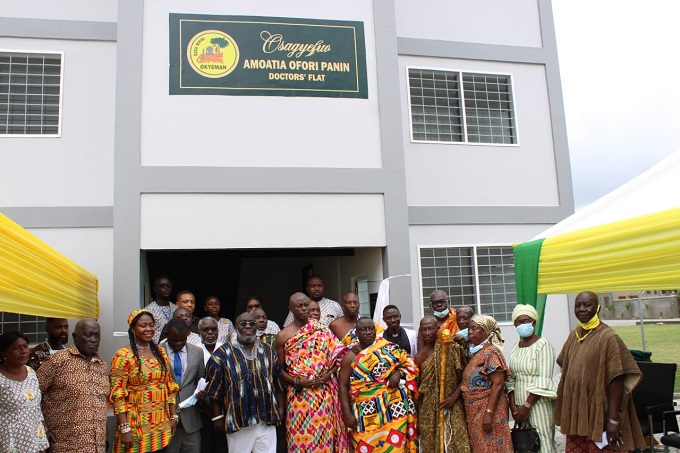 A group photograph of traditional authorities and hospital staff in front of the six-unit flat accommodation facility. Follow @Graphicgh

The Ken and Angela Ofori-Atta Foundation on Friday (August 13, 2021), handed over a newly completed six-unit accommodation facility to the Kyebi Government Hospital in the Abuakwa South Municipality of the Eastern Region to help solve its staff accommodation challenges.

The one-storey facility handed over to the hospital under the auspices of Okyenhene, known as “Okyenhene Osagyefo Amoatia Ofori Panin Doctor’s Flat” is made up three two-bedroom units and three one-bedroom units.

The facility is the first of its kind for the hospital as the two among the four medical officers including the Medical Superintendent working at the facility were housed in bungalows belonging to the Abuakwa South Municipal Assembly.

Current situation
In an interview with the Daily Graphic, the Medical Superintendent of the Kyebi Government Hospital, Dr Richard Nii Darku Dodoo said accommodation for critical medical officers has been a major issue over the years with several doctors objecting to transfers to the health centre.

“Accommodation for staff especially doctors posted here has been a great challenge over the years. Several health workers have declined to work at the facility due to lack of accommodation; and it is very satisfying that upon requests made to the Ken and Angela Foundation we have this erected facility,” he said.

He explained that two medical officers posted to the hospital have been living in a “single room” temporary structure rented by the health facility at Asikam in the next town where they share same toilet facility for a year and counting; whereas the dentist posted to the facility months ago has not resumed work due to accommodation challenges. He added that the hospital also has an esthetician and pharmacist who have also been living in temporary accommodation structures.

Dr Darku Dodoo told the Daily Graphic that the medical officers residing in the next town would be immediately moved into the facility to bring them closer to the facility; adding that the location of the facility is a boost to the hospital’s attempt to maintain critical expertise.
He added that the Ken and Angela Foundation had recently paid an amount to the tune of GHS 9,000.00 to a contractor engaged by the Ministry of Health who abandoned a three-unit semidetached bungalow belonging to the hospital which is expected to be attended to soon.

Maintenance; motivation
Speaking on behalf of the Okyenhene, the Ahweneasehene of Akyem Abuakwa State, Barima Gyansi Koree appealed to the Management of the hospital to develop maintenance culture to preserve the edifice.

He said the edifice named after the Okyenhene cannot be left in a sorry state; hence the need for the development of a proper maintenance plan to keep the facility in proper shape to attract the needed health officials to the hospital.

He added that the health centre which served several towns within the Akyem Abuakwa State deserve vital health experts, therefore, the construction of the new facility would boost the interest of health officers posted to the facility.

Barima Kweku Duah, Etwienanahene of Akyem Abuakwa who represented the Foundation said the facility formed part of their initiative to develop Akyem Abuakwa and Kyebi in particular to its befitting status.

He said accommodation challenges of the hospital staff became a priority to the Ken and Angela Foundation as it had become a worrying situation. He added that provision of accommodation has been a motivation for workers; therefore the new facility has the tendency of satisfying that need to keep and maintain vital health experts closer to the facility.

Appreciation
The Eastern Regional Estate Officer of the Ghana Health Service, Mr. Godwin Annafor expressed gratitude to the Okyenhene and the Ken and Angela Foundation for their benevolent gesture that would address staff accommodation challenges at the hospital.

He pledged that his office in collaboration with the hospital management would make sure the facility is put to proper use and is well maintained to serve its intended purpose for a longtime.