We are still in operation - Kingdom Books 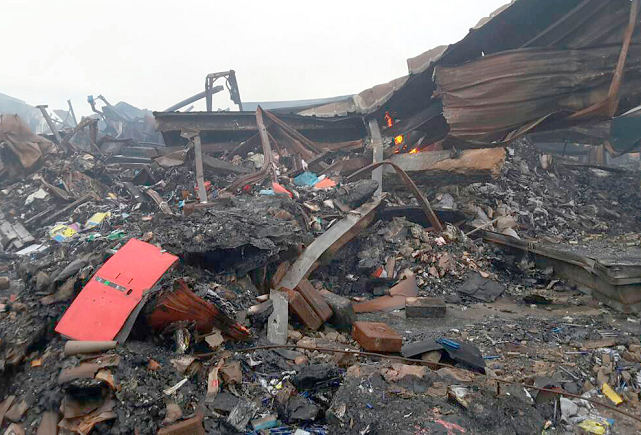 Kingdom Books and Stationery Limited says the fire outbreak at one of the company’s warehouses at Prampram in the Greater Accra Region on June 4, 2017 did not disrupt the company’s operations.

Officials have also indicated that no one was injured.

When the Daily Graphic visited the premises of the company last Sunday, preparations were underway to clear the debris.

The Production Manager, Mr Kwabena Boateng, said, “We are still operating and our workforce is also intact.”

Mr Boateng said the company took environmental safety seriously and had, therefore, ensured that the fire outbreak did not result in any environmental hazards.

Pockets of small fires were seen burning in the debris but officials said they were not dangerous to humans and property.

“Officials from the Fire Service have been here and there is no cause for alarm,” he said.

The fire was put out by men of the Ghana National Fire Service (GNFS) but the damage to the warehouse and its contents was massive.

Mr Boateng expressed gratitude to the general public for their concern over the incident.

The fire started at about 6:30 a.m. from what is suspected to be an electrical fault.

A security guard said a telephone call was made to the GNFS to battle the blaze.