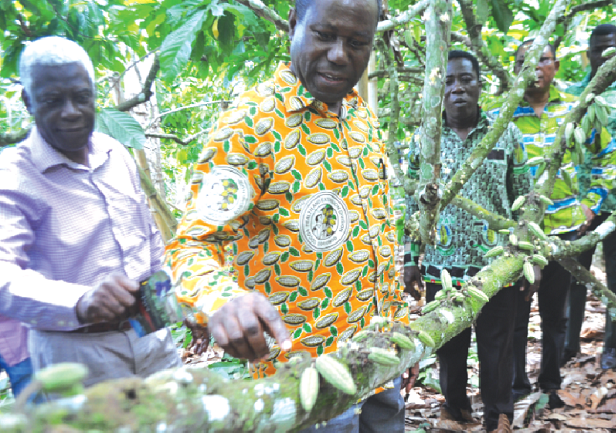 The Ghana Cocoa Board (COCOBOD) has launched a national hand pollination programme  targeted at increasing cocoa yield in the country.

It will employ 30,000 youth who will use their hands to pollinate cocoa trees.

The youth will in the process also train cocoa farmers to learn the technique of pollinating their cocoa trees with their hands to help increase yields from about 12 pods per tree currently to over 100 pods per tree.

The Chief Executive of COCOBOD, Mr Joseph Boahen Aidoo,  who launched the programme at a cocoa farm at Awadua in the Ahafo Ano South District in the Ashanti Region, noted that hand pollination had become necessary because the natural agents for pollination - insects -  had reduced in numbers through the spraying of chemicals on farms to ward off diseases that affected the trees and the pods.

He said for a start, a total of 7,000 youth were undergoing training in the technique and after acquiring the knowledge, they would be paid monthly by the government to pollinate and train farmers.

The numbers, he said, would be increased gradually to 30,000 by April next year.

He explained that the target was to ensure that all farmers acquired the skill to pollinate their cocoa trees on their own,

Mr Aidoo said studies had shown that while farmers in countries like Malaysia,  Indonesia and Ecuador were getting two tonnes per hectre , their counterparts in Ghana got as low as 0.45 tonnes per hectre and that the way out was to undertake hand pollination.

He stated that despite the reduction in the world market price for cocoa,  the government would not reduce the prices and expressed the hope that the farmers would reap more from their toil with the anticipated increase in yields though processes such as hand pollination.

Hand pollination is a process where the pollen is taken from the flower on the same tree or nearby tress and attached to or dropped on the stigma leading to cross pollination.

A team member can pollinate many trees a day.

On some of the farms used to pilot the programme, some of the trees had as many as 150 cocoa pods.