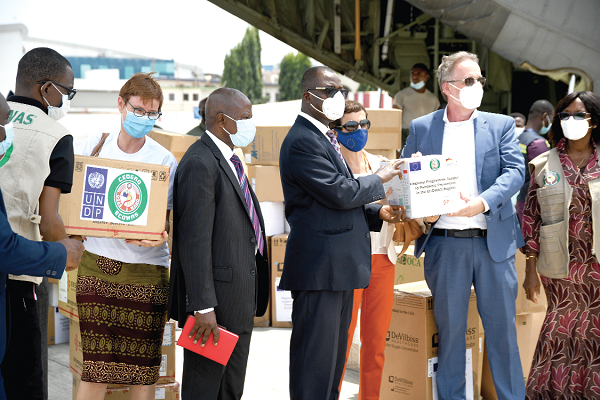 • Mr Christoph Retzlaff (2nd right), the German Ambassador to Ghana, handing over some of the PPE to Dr Kwabena Oku-Afari, the Chief Director of the Ministry of Health.
30.5k Shares

The West African Health Organisation (WAHO) yesterday donated COVID-19 testing equipment and personal protective equipment (PPE) to the government to boost the national capacity at fighting the virus and also sustaining the gains in its containment.

The donation formed part of a $50-million support facility to the Economic Community of West African States (ECOWAS) to enhance the regional fight against the COVID-19 pandemic.

It was financed by the European Commission, the German government and ECOWAS and procured by the United Nations Development Fund (UNDP).

The donation, which is the second allocation under the ECOWAS emergency support facility, has been described as the biggest to any member state.

It was received at the Kotoka International Airport by some government officials, including staff of the Ministry of Health.

Since the pandemic broke out, Europe has mobilised support for response in Africa through a variety of actions designed to help bridge supply and capacity gaps to mitigate the impact of the pandemic on the continent.

The Logistician for ECOWAS’s Regional Centre for Surveillance and Disease Control, Mr Samson Ayeni, who was among the team that donated the items, expressed the hope that the supply would be well utilised.

“It is not the last of the distribution because additional items will be procured, and once that is done, more allocations will be made to the country. ECOWAS has benefited from the support of the government and the people of Ghana and so it is of great pleasure that we do this,” he said.

Mr Ayeni also expressed gratitude to Ghana and Nigeria for supporting the transportation and storage of supplies under the ECOWAS emergency support facility to member countries with aircraft and warehouses.

The Chief Director of the Ministry of Health, Dr Kwabena Boadu Oku Afari, who received the items, expressed gratitude to the donors and financiers.

“We believe this gesture will go a long way to enhance our laboratory testing capacity, the provision of protection for frontline health workers and in the national fight against the global pandemic,” he said.

The German Ambassador to Ghana, Mr Christoph Retzlaff, described the donation as significant, saying: “We are committed to supporting Ghana in the fight against COVID-19. The delivery of these medical procurement to the regional ECOWAS disaster relief facility is another important step in demonstrating our commitment.”

He commended Ghana for the efficient management of the virus and said the EU and Germany were, collectively the biggest contributors to the COVAX facility, with Germany committing more than 2.3 billion Euros.

According to him, Germany had also supported Ghana directly with 25 million euros through a bilateral agreement and helped in setting up a COVID-19 intensive care unit at the Effia Nkwanta Regional Hospital, while assisting some public testing laboratories in the country.

The EU Ambassador to Ghana, Ms Diana Acconcia, said: “The project we are supporting is a good example of ECOWAS’s readiness to deal with the pandemic.”

For his part, the Deputy Resident Representative of the UNDP, Ms Silke Hollander, said the UNDP was delighted to be part of the cooperation aimed at enhancing the fight against the COVID-19.

“The UNDP has been supporting the country not only in the area of health but also offering socio-economic impact support. We are very committed to continuing with the support,” she added.