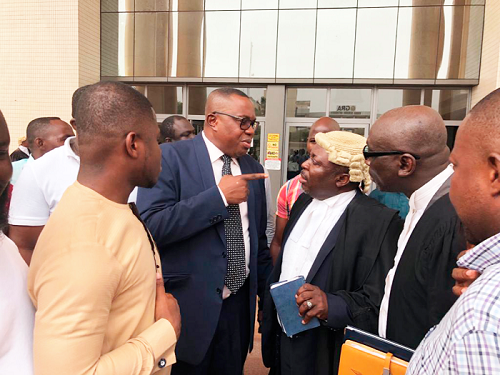 A prosecution witness has told the Accra High Court that the voice on a leaked tape inciting violence against some prominent people was that of the National Chairman of the National Democratic Congress (NDC), Mr Samuel Ofosu Ampofo.

In his testimony yesterday, the investigator, Chief Inspector Bernard Bekoe, said the voice on the leaked tape and that of another recording of Mr Ofosu Ampofo were sent for forensic analysis, and the results proved that the voices in the two recordings were the same.

The said recording, compared with the leaked tape, he said, was a recording of Mr Ofosu Ampofo addressing supporters of the National Democratic Congress (NDC) at the headquarters of the Criminal Investigations Department of the Ghana Police Service after he was invited to assist with investigations.

“There is also 85 per cent probability of coincidence of speech features and defects. It was explained to me that certain words such as ‘people’, ‘officer’, ‘police’ were also pronounced the same in the two recordings,” he added.

According to Chief Inspector Bekoe, the forensic analysis was conducted by the Israeli Forensic Science Institute.

Mr Ofosu Ampofo and Mr Kwaku Boahen, a Deputy Communications Officer of the NDC, are standing trial over a leaked tape in which a voice believed to be Mr Ofosu Ampofo’s was heard inciting NDC supporters to perpetrate violence against the leadership of the Electoral Commission (EC) and the National Peace Council (NPC).

Lawyers for the NDC National Chairman have argued that the purported leaked tape, said to contain their client’s voice, was doctored, while Boahen had also presented an alibi, arguing that he was not even at the said meeting on February 3, 2019, where Ofosu-Ampofo is said to have made the supposed inciteful comments.

For instance, he said, Boahen, in pleading alibi, said he (Mr Boahen) slept at a hotel known as Marigold Hotel on February 3, 2019, but investigations showed that was not the case.

“The hotel manager told me that on February 3, 2019, he was on duty the whole day and that the second accused never showed up there,” he said.

The trial will continue on January 11, 2021, before the court, presided over by Justice Samuel Asiedu, a justice of the Court of Appeal, sitting as a High Court judge.

According to the prosecution’s facts, following the Ayawaso West Wuogon by-election characterised by violence on January 31, 2019, Mr Ofosu Ampofo met with some NDC communicators on February 3, 2019.

The facts explained that at the said meeting, Mr Ofosu Ampofo and Mr Boahen set out a road map of criminal activities, including violence against the EC Chairperson, Mrs Jean Mensa, and the Chairman of the NPC, the Most Rev. Professor Emmanuel Asante.

It said an audio recording of the said meeting was leaked, leading to investigations by the Criminal Investigations Department of the Ghana Police Service into the comments on the tape.

The prosecution added that on February 20, 2019, Mr Boahen granted a radio interview in which he confirmed his participation in the meeting, and also revealed that the leaked audio recording was a true reflection of what had transpired at the February 3, 2019, meeting.