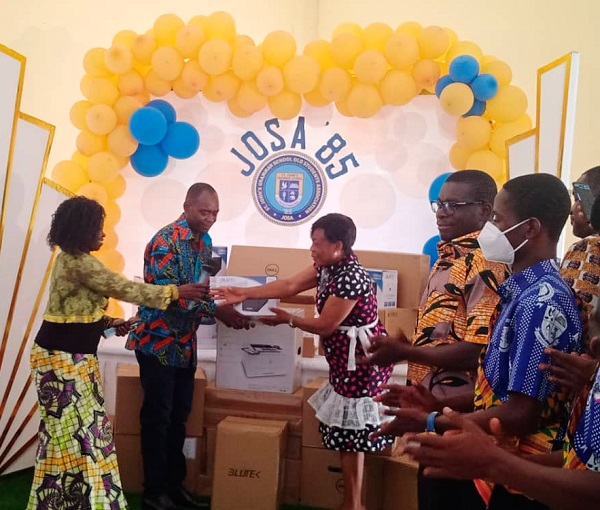 The 1985 Year Group of St John’s Grammar Senior High School (JOSA ‘85), Accra, has presented a set of computers and accessories worth GH¢45,000 to its alma mater with a call on the students to be disciplined and concentrate on their studies.

The President of JOSA ‘85, Mr George Ackerson, who made the call, said it was only through discipline and focus that they could succeed in their academic and personal life.

According to him, the 1985-Year-Group decided to donate the computers and also hold a symposium to educate the students on the importance of discipline and to demonstrate their love and concern for the school.

The symposium, which was on the theme: “Enhanced Discipline,” was attended by members of the 1985 Year Group, staff and students.

Mr Ackerson said the programme was focused on discipline in view of the rising cases of indiscipline and delinquency among students.

He mentioned some undisciplined acts as drug abuse, bullying, fighting, reporting late to school, tattooing and keeping unkempt hair while in school.

“Indiscipline leads to poor academic performance. The best way to be focused academically is to be disciplined and follow instructions, “ he said.

Mr Ackerson announced that the group would continue to support the school, educate and interact with the students periodically.

He lauded members of JOSA ‘85, who contributed towards the programme and the purchase of the computers, and urged them to continue to support their alma mater.

An Assistant Headmistress of the school, Rev. Mrs Betty Baidoo, who received the donation, expressed gratitude to JOSA ‘85 for coming to the aid of the school.

She said the computers would help facilitate teaching and learning and improve the well-being of the students.

She promised that the school would maintain the computers to ensure a longer life span.