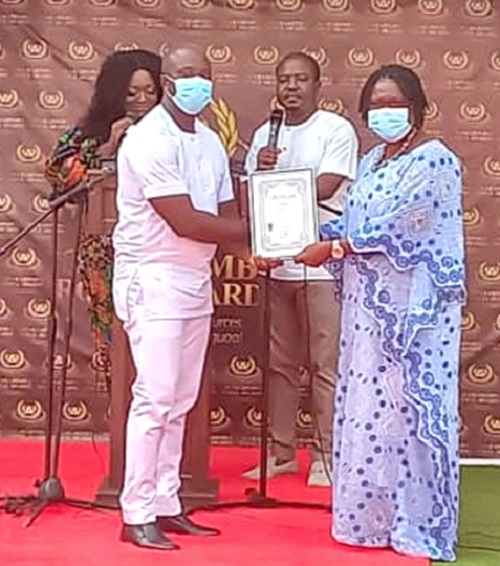 The 2022 Osabarimba Royal Awards has been held to honour 59 firms, individuals, organisations, and agencies operating in the Cape Coast Metropolis for their outstanding services and contributions to the area's overall growth.

The awards ceremony is an annual Oguaa Traditional Council event initiated by the Omanhen of the Oguaa Traditional Area, Osabarimba Kwesi Atta II, in partnership with Ridge Royal Hotel, to recognise businesses and individuals supporting the growth of Cape Coast.

Winners in the 14 categories of the awards were honoured with citations.

The Cape Coast Teaching Hospital which was recognised as the sole facility in the metroplis that provides advanced clinical health services to support primary and secondary health care, won the award for Most Outstanding Health Facility on the day.

Receiving the award on behalf of the hospital’s management, the Public Relations Officer of the facility, Mr Frederick Nyankah, expressed his delight at the honour and noted that the recognition reinforced their commitment to provide the best medical service to the region.

The Superintendent Minister in charge of the Wesley Cathedral of the Methodist Church in Cape Coast, Rt Rev Richardson Aboagye Andam, was named the most influential religious leader for his strong involvement in ecumenical activities in Cape Coast and his humanitarian efforts.

The Wesley Methodist Cathedral in Cape Coast on the other hand, was named the most impactful in the community.

The ceremony honoured Mfantsipim School as the all-round best second cycle institution, while Adisadel College was named the best school in sports.

In the tourism category, Cape Coast Castle was named the most fascinating and Ghana Tourism Authority compliant tourist site, while the Tourism Department of the Cape Coast Technical University was named the best hospitality institution in Cape Coast.

Several media personalities, private businesses, and public facilities were also honoured for their outstanding contributions to the region's socio-economic growth during the ceremony.

The ceremony also recognised some media celebrities, private businesses, and government facilities for their outstanding contributions to the metropolis' socio-economic growth.

In his welcome address, Osabarimba Kwesi Atta emphasised the importance of the event in reawakening indigenes of the metropolis who are far away, to demonstrate support for Cape Coast's prosperity.

He said that the ceremony aimed to return Cape Coast to its former prominence in the country, and urged all stakeholders to work together to achieve that goal.