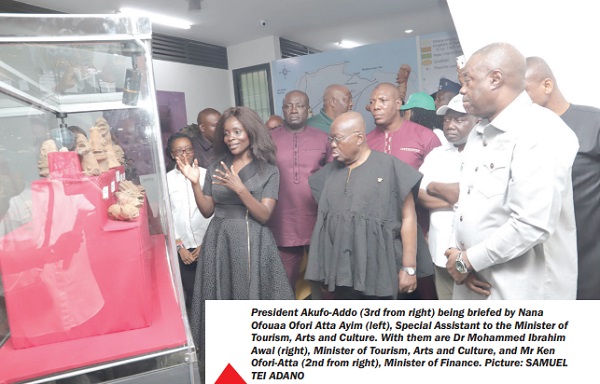 The museum had been rehabilitated and restored to its original state with the inclusion of additional exhibits and artifacts.

In seeking to enrich the experience of visitors, curators of the museum have also added seven of the vehicles used by former heads of state.

The museum, which was opened in 1957, was closed to the public in 2015 for lack of maintenance.

President Akufo-Addo said the rehabilitation of the museum was part of the government’s vision to create a more vibrant cultural industry sector.

He said the country had 65 per cent of its edifices, including the oldest European edifice in Africa, the Elmina Castle, built in 1482, and that they were all linked to the Trans-Atlantic Slave Trade.

With the tourism sector being the third-largest contributor to the Gross Domestic Product (GDP) of the country, the President gave an assurance that the government would continue to support the sector to do more.

On leveraging digitalisation for growth, he said the government had put systems in place to ensure efficiency in revenue generation in the tourism, arts and culture space.

“A visit Ghana app has been developed to help tourism enterprise operators promote and market their products. There are also plans to digitalise our museums to enhance their global appeal.

“In addition, five ultra-modern amphitheaters in selected regions in the country are being built this year with another five to be constructed next year.

And as part of efforts to improve customer service in the tourism and heritage sector, we are also providing cutting-edge training for stakeholders to ensure that our products have a global appeal, the President added.

He further charged the Ministry of Tourism, Arts and Culture and its agencies to work towards attracting two million tourists into the country by 2024, which the President said could generate a revenue of about $4 million and also create some 150,000 jobs.

President Akufo-Addo commended the Minister of Tourism, Arts and Culture, Dr Ibrahim Awal Mohammed, for overseeing the reopening of the museum, saying “he (Dr Awal) continues to vindicate my decision to appoint him as minister for the sector following his brilliant exploits as Minister of Business Development in my first term”.

He further charged members of the ministry’s board and the acting Executive Director of the Ghana Museums and Monuments Board (GMMB) to take very good care of the facility.

In his address, Dr Awal said his outfit had a business model to attract tourists to the museum to generate more funds.