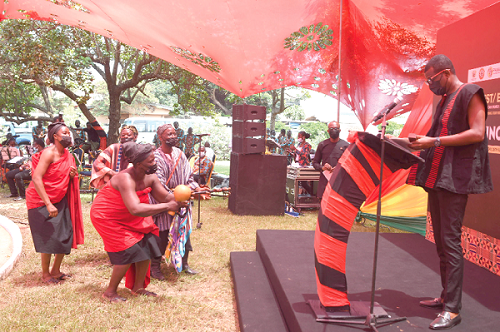 Mr Mark Okraku Mantey( right), Deputy Minister of Tourism, Arts and Culture being welcomed with a cultural performance before he delivers his speech

At the ceremony, the Deputy Minister of Tourism, Arts and Culture, Mr Mark Okraku Mantey called on Africans to build a more united and prosperous continent where all people of African descent could flourish adding that a united Africa could unearth talents that could be nurtured to benefit all humanity.

Mr Mantey said there was the need for Africans to have the mind and strength to support each other and  change their narrative.

The celebration was meant to remember the millions who had died because of the African struggle for survival.

Similar events were held at the W.E.B. Du Bis Centre and the George Padmore Library in Accra.

In attendance were the US Ambassador to Ghana, Ms Stephanie S. Sullivan; the Osu Alata Mantse, Nii Kwabena Bonney V; the Head of Mission of the African Union Forum, Dr Erika Bennett, and the Director of African Heritage Studies based in the United States.

Some musicians and artists who arrived in the country days before to participate in the event included US musician, Toni Tony Tone and Reggie Callow, with his RPA team.

Under the auspices of the Ministry of Tourism, Arts and Culture, this year’s celebrations started from July 26, 2021 and will end tomorrow, August 1, 2021.

This year’s PANAFEST was on the theme ''Securing the African family: our health, our wealth, our soul” while the Emancipation Day was celebrated on the theme ''Reclaiming our right to weave our own narrative''.

The event was marked with speeches, musical performances, cultural dancing and poetry recitals.

''It is, therefore, ironic for people who have been traumatised by slavery and suffered discrimination because of racial differences to easily forget their common bond of brotherhood and tragically tear each other apart. Emancipation must be held at the forefront of our minds as a triumph of the human spirit over evil and atrocity,'' Mr Mantey said.