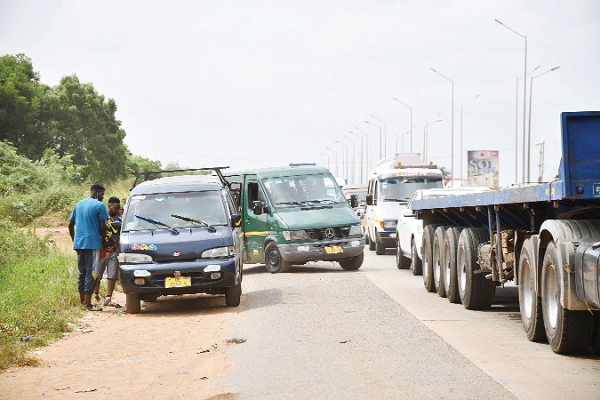 Indiscipline on the country’s only motorway, the Accra-Tema Motorway, is brewing danger for motorists who ply the 19-kilometre (km) expressway on a daily basis.

A Daily Graphic team that monitored activities on the road that most befits the description of highway for about five hours last Wednesday observed that the illegal activities along the 19-kilometre motorway were mainly perpetrated by drivers, slum dwellers, tricycle riders, farmers and herdsmen.

The dangers include pedestrian and livestock knockdowns, car crashes and other accidents thatlead to the loss of lives or injury to drivers, passengers and pedestrians.

The team also observed that there were growing slums and shanty towns along the highway whose dwellers had converted the bare land serving as buffer between the motorway and the settlements to vegetable farms, with others herding cattle at different sections of the motorway.

The situation is so dire that the motorway has become the easiest place to witness an accident any time of the day.

In fact, the team witnessed an accident involving a loaded truck and a saloon car at an illegal bus stop known as ‘KICC’. The accident was occasioned by commercial bus (trotro) drivers stopping near a slum and rejoining the expressway without due care.

The only occupant of the saloon car, a lady of about 35 years, was badly injured and rushed to the Tema General Hospital.

An eyewitness said the saloon car veered off its lane in an attempt to avoid a trotro which had stopped abruptly on the shoulder of the road to pick a passenger.

The team also observed that while some drivers used the shoulders of the road to jump traffic, others stopped on the shoulders to take a nap, with commercial vehicles, mostly the trotros, using unapproved routes to either enter or exit the highway or pull over to pick or drop passengers, in contravention with the Ghana Highway Code.

Other motorists also drove on the wrong side of the expressway, inconsistent with their speed, thereby compelling other vehicles to do wrongful overtaking.

A few tricycle operators were also seen trying to create unapproved U-turn spots, criss-crossing the highway with loads of refuse or consumables.

The team also spotted a number of tricycles carrying refuse and moving at tortoise pace towards the Tema end of the motorway.

However, it observed that almost all the potholes that had characterised the motorway had been sealed with bitumen and the illegal U-turn spots barricaded with galvanised pipes.

A highway is usually a road in either a rural or urban area where points of entry and exit for traffic are limited and controlled.

A highway is, therefore, expected to reduce traffic and provide fast and convenient access for vehicles commuting between two distances without a room to stop indiscriminately.

An officer of the National Road Safety Authority (NRSA), Mr Ransford Tetteh, told the Daily Graphic in an interview that acts of indiscipline had contributed to most of the accidents recorded on the motorway.

“Speeding, wrongful overtaking, wrongful parking, illegal U-turns, among others, are taking lives on the motorway frequently, although we have increased our surveillance efforts,” he said.

From the onset of the monitoring exercise, the team observed that trucks loaded with assorted goods had parked along the shoulders of a segment of the busy highway.

It counted about 15 trucks parked along the shoulders of the entire stretch of the motorway, either to get faults fixed or for the drivers to take a nap.

Most of the trucks were carting transit goods from the Tema Port to landlocked neighbouring countries such as Burkina Faso and Mali. There were, however, vehicles with Ghanaian registration numbers that also indulged in the act.

A driver, who identified himself only as Abbas, told the Daily Graphic that he had parked along the road to wait for the designated time for transit trucks to commence their journey, usually in the evening.

“We don’t have any place to park and wait for the evening when we are allowed to go, so we park here just to wait, and sometimes we sleep while waiting,” he said.

A man who operates a makeshift vulcanising workshop on the shoulder of the Accra-bound stretch of the motorway, Mr Abdul Basit, said he had been operating at the spot for about a year without any permit or approval from the authorised agencies.

Although his location was unauthorised and he did not pay tax, he said, nobody had approached himto regularise his operations.

The team also observed that some drivers, especially security officials in police, customs and military uniforms, drove along the shoulders of the highway with impunity when there was traffic build-up on the route, and that created distractions for drivers on the approved lanes.

In an interview with the Daily Graphic on the observations made by the team on the motorway, the Public Relations Officer of the Ghana Highway Authority (GHA), Mr Cecil Wentum, said the authority had begun efforts to help improve the condition of the motorway.

He said the motorway, which was opened to traffic in November 1965, had outlived its design life and needed to be reconstructed to help raise its standard to be fit for purpose.

“It has outlived its design life. We are aware that something is being done, but the long and short of it is that it needs to be reconstructed,” Mr Wentum said.

The Director of Operations at the Greater Accra Regional Police Command, Assistant Superintendent of Police (ACP) Kwasi Ofori, said the police had highway patrol teams that always traversed the motorway.

He said those illegal acts happened on the blind side of the police, who were not there throughout the day.

ACP Ofori, however, indicated that the police had managed to reduce the crime rate, such as armed attacks, on the expressway to the barest minimum.