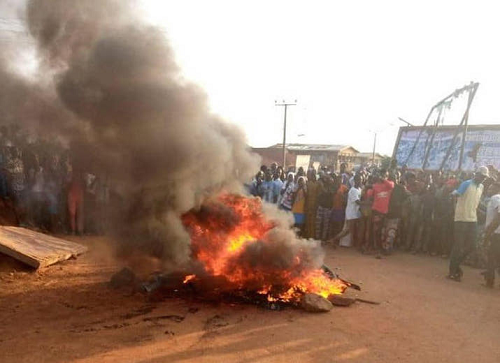 An angry crowd at Karaga in the Northern Region last Thursday set a suspected armed robber ablaze after a robbery attack on a mobile money vendor.

The unidentified man was burnt to death in a gutter in an act of instant justice.

The motorbike he used in the robbery operation was also burnt.

He was reported to be among a group of four armed men who attacked and robbed one Mohammed Muftaw, a mobile money vendor in Karaga, of an unspecified amount of money .

The charred body has been deposited at the Tamale Teaching Hospital (TTH) mortuary.

The Northern Regional Police Crime Officer, Superintendent (Supt) Mr Bernard Baba Ananga, who confirmed the robbery attack to the Daily Graphic, said the police had intensified their search for the other accomplices of the deceased suspected robber who was yet to be identified.

Supt Ananga said on December 17, 2020 at about 7p.m, the police had information that four armed men on two motorbikes attacked a mobile money vendor, one Mohammed Muftaw, in Karaga and robbed him of an unspecified amount of money.

Mr Ananga said some youth of Karaga managed to arrest one of the suspects, who was yet to be identified and burnt him to death together with his motorbike in a gutter.

He stated that the police got wind of the incident and went to the scene of the attack, but they arrived too late as the body had already been set on fire.

He said given the circumstance, the police could only disperse the mob.

The Northern Regional Police Crime Officer said investigations were ongoing to track and arrest the rest of the robbers who were on the run.

The Daily Graphic also gathered that the assailants were on two motorbikes and started firing to scare the mobile money vendor and those within the area.

The attackers succeeded in robbing Muftaw of the money and tried to leave, but while the others managed to escape with the undisclosed amount of money, the motorcycle of the deceased failed to start.

An alarm was raised, and the youth in the area, numbering about 200, gathered and apprehended the suspect.

The source said they beat him mercilessly, pushed him into the gutter together with his motorbike and set him on fire.

The Northern Region has recorded several cases of armed robbery, with the attackers targeting travellers on the highways, mobile money vendors and forex bureau operators.