Mother of triplets cries for help 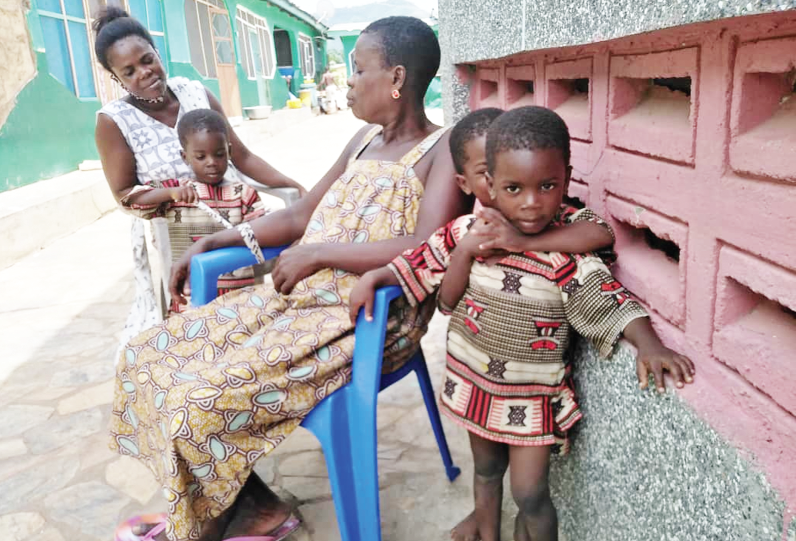 Mrs Leticia Attiakpo (left) with Mrs Theresa Anim, her mother, and the triplets

A mother of a set of triplets is appealing for help to cater for her children and also seek medical attention. She suffered a mild stroke after giving birth.

“I am asking for help to be able to treat myself, treat my children. I have mild stroke which is preventing me from working but I hope to get well in order to work and take good care of my children. I have an HND in Hotel, Catering and Institutional Management so if I get money I will start my own business by making pastries and other food items for sale,” she told the Daily Graphic.

Mrs Attiakpo said she met her husband, a Togolese, five years ago at Asokore in the Eastern Region and they got married not long afterwards .

According to her, her husband was initially helping her to take care of the babies, but he vanished into thin air due to the expensive medical care for her treatment and that of the children.

“He was helping at the initial stages, but later vanished and I have not heard from him since. All efforts to locate him has proved futile,” she said.

She said taking the children to the hospital monthly for weighing was entirely her business until one Pastor Joseph Appiah offered to support her.

Mrs Attiakpo is currently at a spiritual centre in Koforidua seeking treatment for her predicament, while the children are with her mother, Mrs Theresa Anim, at Asokore.

Narrating the ordeal she went through during childbirth, she said she delivered after eight months of pregnancy through Caesarian Section at the Koforidua Regional Hospital and the babies would have died if the medical team had not put in much effort.

According to her, the first two babies fared better, but the third born was kept in an incubator for much longer due to complications.

“When the first two babies were discharged, they also started developing complications such as changes in the colour of their eyes, fingers,” she said.

In view of that she said they had to be put him back in an incubator.

“We moved from the pre-heat to light and that was back and forth with the two because as soon they were taken away from the light, you see them dying slowly, with their colour changing,” she added.

She said it took almost a year for the children to get well, but added that “they still suffered from lots of ailments and needed constant care.”

The children, who are currently three years, have started school, but their mother can neither pay their fees nor buy them the prescribed school uniforms.

The children go to school with their house attires, hoping that they will get their uniforms soon.