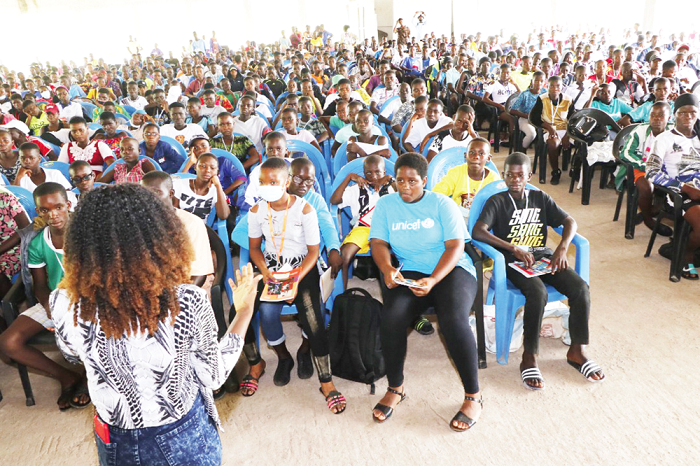 The participants being taken through some lessons

The Nneka Youth Foundation, a non-profit organisation, has held its 2021 Mega World Changers Camp meeting for over 1,900 young people.

The camp was aimed at bringing young people from diverse backgrounds, between the ages of 13 - 16, with a focus on issues concerning their goals, life choices as well as reproductive health issues.

The Nneka 2021 world changers camp held at Ve-Agbome in the Afadjato South District of the Volta Region, spanned over two weeks with young people drawn from 20 districts in the Volta, Oti and Greater Accra regions.

Participants in the camp benefited from psycho-social empowerment lessons, and were also exposed to economically viable skills including beads, bracelet, bags and paper crafts.

The Founder and Principal of the Foundation, Madam Cecilia Fiaka, noted that the camp also provided opportunities to the young ones to engage in intellectually stimulating activities such as spelling bee, and reading competition.

She said the camp was aimed at empowering and positively impacting, especially teenage girls in the community, to make them economically independent. This, she said, would end the rampant teenage pregnancies among adolescent girls.

"This whole programme started in 2012 in Ve Gbodome and its surrounding communities because we realised that the youth were constantly dropping out of school, teenage pregnancies were at an alarming rate and very young boys were also into drugs because they have no viable skills and no activities to engage in", she said.

The Nneka Foundation, according to her, has designed programmes including vocational and entrepreneurial pathway (VEP) for girls out of school and young women to offer them training in beads making, batik designing, cassava flour production and other crafts.

It was so humbling to have various important personalities present on camp this year", she said.

The Chief Inspector of schools at the Afadjato South District Education Directorate, Mr Caesar Dei-Tutu, said the Foundation's initiative was laudable and said the participants would get the needed knowledge and skills to enable them to excel.