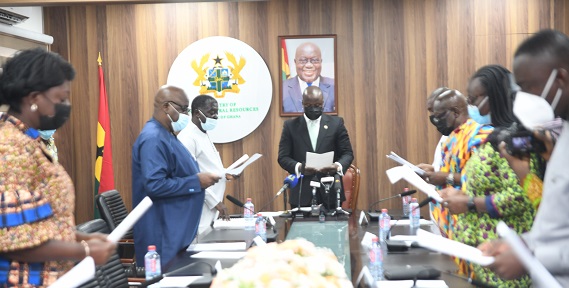 The Minister of Lands and Natural Resources, Mr. Samuel Abu Jinapor, has reassured Ghanaians that he will not rest until he fulfils the mandate given him by President Nana Addo Dankwa Akufo-Addo to fight and win the war against illegal mining, popularly called galamsey.

The minister said although the battle against the menace was a complicated one that could not be won "by just one stroke of an intervention," it would be won eventually.

"I am guided by what the President indicated to me when he first called me to officially inform me that he would make me the Minister of Lands and Natural Resources. He told me that matters I was supposed to deal with at the ministry were about Ghana; the people's forests; the people's lands and the people's minerals.

"I am aware of this and I will lead sustained efforts to win the fight against galamsey," he said.

He was speaking at the inauguration of an 11-member Advisory Board of the Ministry of Lands and Natural Resources in Accra yesterday.

The advisory board was inaugurated in compliance with Section 39 of PNDC Law 327, which mandates ministries to establish ministerial advisory boards.

Section 40(1) and (2) of the law states that the advisory boards are set up to: "promote constant interaction between the ministry and those who use the ministry's services and to advise the minister on policy adjustments, planning objectives and operation strategies."

The board is chaired by the minister as required by law.

The two deputy ministers - Benito Owusu-Bio and George Mireku Duker; the Chief Director of the Lands Ministry, Prof. Patrick Agbesinyale, are part of the board.

The board also has prominent Ghanaians such as the Paramount Chief of Assin Owirenkyi Traditional Area, Ehunabobrim Nana Prah Agyensaim VI; the Executive Director of the Salt and Light Ministry, Dr. Joyce Aryee; the Vice-Chancellor of the Kwame Nkrumah University of Science and Technology (KNUST), Professor (Mrs.) Rita Akosua Dickson; and lawyer Jacqueline Boakye-Yiadom.

The other members are the Members of Parliament (MPs) for Ablekuma North in the Greater Accra Region and Manhyia North in the Ashanti Region, Ms. Sheila Bartel and Mr Akwasi Konadu; and a former chairman of the National Communications Authority (NCA) board, Mr. Kwaku Sakyi-Addo.

There were reports about the worsening state of River Ankobra following the resurgence of galamsey activities.

The team embarked on an operation from the Ampansie to Dominase stretch of the river, leading to the burning of 17 changfang machines on that stretch.

Touching on that issue, the minister said all steps would be taken to ensure that persons who still engaged in galamsey, despite the numerous interventions by the government, were flushed out and dealt with according to the law.

Mr. Jinapor said given the calibre of persons that had been assembled to constitute the Lands Ministry Board, he was confident that the members would help the government and the ministry to deal with the myriad of challenges in the mining and land sectors.

"As a board, we will have to deal with complicated issues relating to the exploitation and management of the mineral resources of our country; how to grow the mining value chain; local content; the small-scale mining sector and effective land administration," he said.

He also said the board would have to demand accountability from agencies under the Lands and Natural Resources Ministry since their role would go a long way to help address the challenges in the mining, forestry and land sectors.

For his part, Nana Prah VI assured the minister that the board would give him "good counsel" and support every effort that would ensure proper management of the country’s land and forest resources.

Describing the board as formidable, he said they would surely live up to the task expected of them under the law.

He also assured the minister that the board would engage other relevant stakeholders to help protect the country's natural resources.