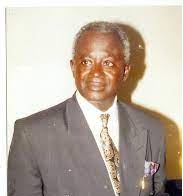 He also credited him as the man who first gave him his political appointment as secretary to the then People Movement for Freedom and Justice.

The President said this at Juaben in the Ashanti Region yesterday when he inaugurated the "Prof. Adu Boahen Memorial Square," built in memory of the Professor posthumously in fulfilment of a 2016 campaign promise.

Addressing a large gathering, mainly New Patriotic Party (NPP) faithful, in the twi language, President Akufo-Addo expressed his appreciation to the late Prof. the NPP’s first presidential candidate, for contributing to his rise to the Presidency with good counsel in his formative political career.

His five-minute speech was full of praise for the political stalwart whom, in spite of his arrest and imprisonment under the General Kutu Acheampong regime, was able to bounce back to lead the NPP in 1992.

The public square, which sits on about two acres of land, was built by the Middle Belt Development Authority, with active support from the late Professor's children and family as well as the Juaben Traditional Council.

It has eight pavilions, a presidential arena, a special dais for traditional leaders and an open space decorated with special stones.

The square also has VVIP (Very Very Important Personality) and a VIP arena and two offices for administrative work.

The frontage has a huge billboard of the late Emeritus Professor welcoming guests to the grounds.

A first-class asphalted road, linking the project site and the main town as well as other auxiliary facilities, give an added beautification to the project.

It is the first time such a national honour has been built and dedicated to his memory.

The Paramount Chief of the Juaben Traditional Area and Chairman of the Council of State, Nana Otuo Siriboe II, commended President Akufo-Addo for redeeming his 2016 campaign promise of honouring the late Professor.

He also applauded the Middle Belt Development Authority under its Chief Executive Officer (CEO), Mr. Joe Danquah, for triggering and executing the project under the one-million dollar per constituency initiative of the President.

He said under the initiative, Juaben was also to benefit from a number of development projects, including the construction of an Astro turf to unearth talents among the youth.

Nana Siriboe also eulogised the late Professor for his contributions towards free speech and democracy.

He traced the history of the late professor from his primary school days with constitutional lawyer and traditional ruler, Prof. S. K. B. Asante, through to his days in academia and politics.

Prof. Adu Boahen is credited for drafting the first proposal for the establishment of the Juaben Rural Bank.

The son of the late Professor, Mr. Charles Adu Boahen, who read the biography of his father, re-emphasised his late father's academic independence and political consciousness at Mfantsipim School where he participated in a student riot in 1948 following the arrest of the Big Six.

He tagged his father as a freedom fighter and a founder member of the NPP.

Mr. Adu Boahen, who is also a Minister of State at the Finance Ministry, also described his father as a humble man in spite of his astute academic prowess.