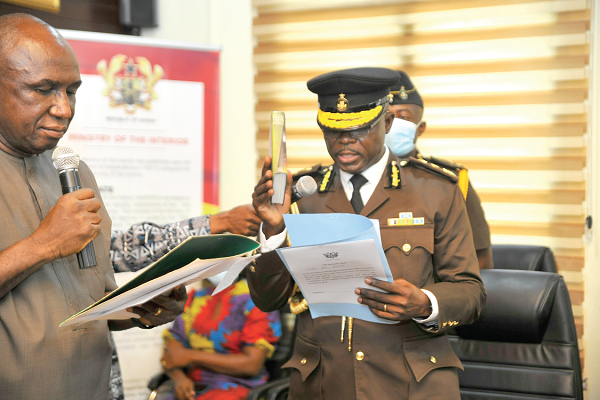 The acting Director-General (D-G) of the Ghana Prisons Service, Mr Isaac Kofi Egyir, has been confirmed as the substantive head and inducted into office as the 26th D-G of the reformative institution.

He was appointed as the acting D-G by President Nana Addo Dankwa Akufo-Addo on August 1, this year to succeed Mr Patrick Darko Missah, who was proceeding on terminal leave.

The Minister for the Interior, Mr Ambrose Dery, on behalf of the President, swore in Mr Egyir in Accra yesterday.

Mr Dery congratulated the new D-G and said: “Your nomination and confirmation show the confidence the President has in you, and we are convinced that you deserve it.”

The minister said the Prisons Service played a crucial role in the administration of justice and urged the D-G to offer effective leadership.

He said the President was committed to helping the security services to realise their objective of ensuring peace and security in the country, for which reason the government was retooling them with equipment and infrastructure.

The D-G outlined his vision to include adding value to prison inmates to enable them to earn decent living after serving their terms.

“It is of interest to mention that I personally believe in a long held view that every human being deserves a second chance: a chance that provides opportunity for every human being to correct his or her mistakes and behave in a socially acceptable manner, and our unfortunate brothers and sisters in custody are no exception,” he said.

Mr Egyir also mentioned the rolling out of effective rehabilitation programmes, especially in agriculture, where he said the service had comparative advantage, and other initiatives for inmates to enable them to re-integrate into society successfully.

He expressed his gratitude to the President for the distinguished honour done him by his promotion to the highest office in the service and gave an assurance that he would live up to expectation.

He also thanked the Mr Dery, members of the Prisons Service Board and personnel of the service for their support.

Mr Egyir is the 26th D-G of the Ghana Prisons Service and the 19th Ghanaian to occupy the office, which had C.B Moses as the first Ghanaian to assume that role in August 1952, having succeeded the last foreigner D-G, H.G Heatley.

Mr Egyir was born on August 21, 1964. He is a seasoned prison officer who, until his appointment as D-G, was the Deputy Director-General of Prisons (DDGP) in charge of Operations.

He has 26 years’ working experience, which includes a five-year duty with the United Nations Department of Peacekeeping Operations in The Sudan and South Sudan as a Corrections Advisor and Military Detention Manager, respectively.

He was enlisted into the service as an Officer Cadet on December 5, 1995 and commissioned as a Deputy Superintendent of Prisons on July 5, 1996.