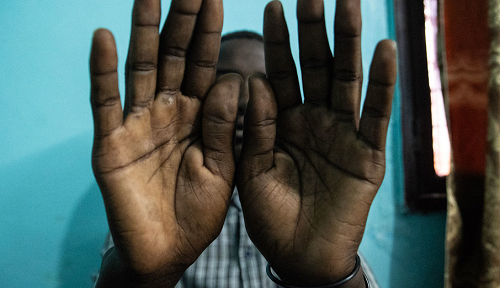 The Anti-Human Trafficking Unit of the Ghana Police Service has identified Ningo-Prampram in the Greater Accra Region as a hotspot for the trafficking of minors for fishing expeditions.

An officer at the Anti-Human Trafficking Unit of the Tema Regional Police Command, Detective Chief Inspector Raymond Mwinsori, who disclosed this, said children were increasingly being targeted through online platforms and they ended up in sexual exploitation, forced marriage and other forms of abuse.

Consequently, the unit has decided to embark on an awareness campaign among chiefs, queen mothers and assembly members in the Ningo-Prampram Traditional Area, with the view to seeking their support to end the menace.

At a one-day awareness workshop in Prampram, Chief Inspector Mwinsori solicited the support of all leaders, be they traditional, community or political, to support the police by providing essential support for victims and also educating community members as a way of empowering them with information on the phenomenon.

The workshop was organised for members of the Prampram and the Ningo Traditional councils.

It was organised in partnership with Abuse Relief Corps, a non-governmental organisation (NGO) that facilitates justice for victims of abuse, and aimed at raising awareness of the menace and equipping the stakeholders to understand the need to end human and child trafficking and all forms of exploitation.

He said most people had used poverty and hard economic conditions as excuses to voluntarily give mostly their children up to be used as hands in different economic ventures.

He called on traditional authorities, assembly members, market leaders and all stakeholders to support efforts in the fight against human trafficking.

He explained that in Ghana the internal trafficking of children into hazardous labour had become a major challenge that put the lives of victims at risk.

Chief Inspector Mwinsori indicated that statistics available showed that many Ghanaian children who fell victim to the menace were trafficked from their homes to work in the fishing industry in particular.

He disclosed that last year the unit embarked on an operation in the Oti Region, during which 11 children trafficked from the Ningo-Prampram District to work as fish hands along the Volta Lake were rescued and reunited with their families.

A member of the Prampram Traditional Council, Shippi Teye Kutor III, in a submission, said although poverty was one of the largest contributors to human trafficking, parents must not use that as an excuse to engage in the crime.

Rather, they should invest in the education of their children to make them competitive on the job market in future, he said.

He also said traditional rulers must not be interested only in the sale of land but also invest in the youth by offering them educational scholarships and other financial support to enable them to learn some trade or vocational skill.

The Child and Victim Advocate at Abuse Relief Corps, Mrs Janet Isoko, expressed the hope that the stakeholders, including the traditional leaders, having understood the root causes of human trafficking, would support efforts by the Anti-Human Trafficking Unit to end the menace by promptly reporting cases of abuse to the police to prevent human trafficking.