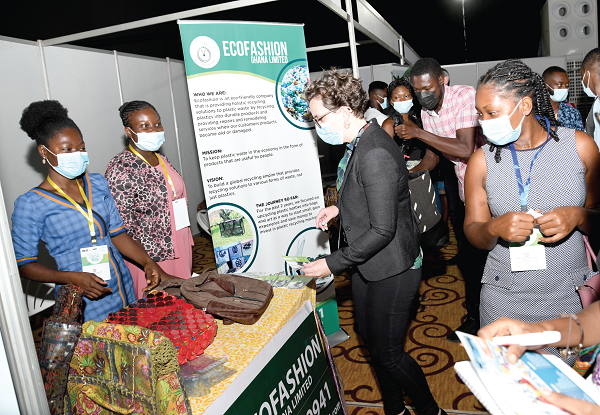 Some participants in the seminar admiring some Ghanaian made products displayed at the venue. Picture: EBOW HANSON

The government last year allocated a total of GH¢659.5 million to the delivery of water and sanitation programmes as part of efforts to attain Goal Six of the Sustainable Development Goals (SDGs) of the United Nations, a Deputy Minister of Finance, Ms Abena Osei Asare, has said.

She was speaking at the second edition of an European Union (EU) Circular Economy seminar in Accra yesterday.

The two-day seminar intends to create awareness of the need to change from a linear to a circular economy by identifying actions and measures that will boost the efficient use of resources through a clean and circular economy to mitigate climate change, revert biodiversity loss and cut down pollution.

On the attainment of Goal Seven of the SDGs, Ms Asare said the government had embarked on a number of policy initiatives to enhance access to quality, affordable, reliable, sustainable and modern energy for all.

They included the distribution of 60,283 solar lanterns with phone charging functionality at a discount to poor off-grid rural households and the electrification of 582 communities in the Ashanti, Bono, Bono East, Ahafo, Eastern, Volta, Oti and Western regions, she said.

“In all, a total of GH¢13.6 million was allocated to Goal Seven. The major funding source for the attainment of Goal Seven was the government, through internally generated funds (IGFs) and statutory funds, which contributed GHc11.6 million,” she said.

And under Goal 13 of the SDGs (Climate Action), the minister said, GH¢221.4 million was budgeted for in 2021 and GH¢211.4 million approved, with GHc10 million allocated for the delivery of the programmes.

The Minister of Environment, Science, Technology and Innovation (MESTI), Dr Kwaku Afriyie, in a speech read on his behalf, said since 2017, the government’s policy on the management of resources had been based solely on the principles of circularity.

“With support from the Global Environment Facility (GESF), MESTI has partnered UNIDO to establish a national circular economy framework for the management of the plastic value chain.

“Also, the Hazardous and Electronic Waste Control and Management Act, Act 917, 2016, addresses the management of electronic waste in the country based on circularity principles,” he added.

The EU Ambassador to Ghana, Mr Irchad Razaaly, said the union was encouraged to organise the seminar as a result of the vibrant interest both the private sector and civil society had demonstrated in the subject.

For her part, the Director for Global Sustainable Development at the European Commission’s Directorate General for the Environment, Ms Astrid Schomaker, said a study conducted by the EU estimated that Africa’s combined gross domestic product was about 2.2 per cent higher and could increase to 11 million additional jobs by 2030 with the transition to a circular economy.