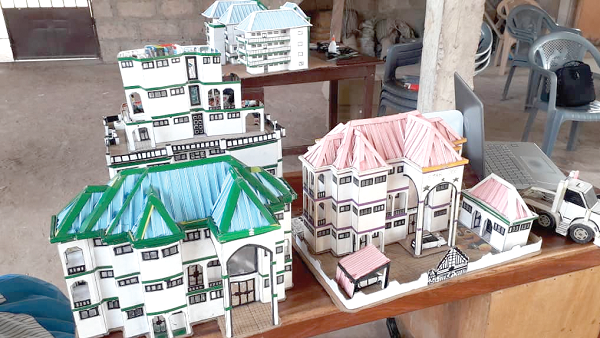 Some of the architectural works.
30.5k Shares

For first-year student Godfred Boateng of the Bonda D/A Junior High School in the Krachi District in the Oti Region, his dream is to become an architect.

With amazing replica of important structures in the country such as the Jubilee House, the State House, the E-Blocks, among others, the 15-year old boy truly has some raw talents that need to be nurtured.

Godfrey, who is living at Bonda with his father, and is currently at Maamekrobo in the Kwahu Afram Plains South for a holiday, is a centre of attraction as both young and old troupe to the St Theresa’s Roman Catholic Mission House to behold the spectacle.

Godfred has an eye for specifics, which he brings to bear on his work with exquisite finishing, as though he were someone who had done a professional training as an architect.

His talents in using paper cards to construct miniature buildings has attracted the attention of the Parish Priest of the St Theresa's Catholic Church, Rev Fr Stephen Sakpaku, who offered to give him space to display his handiwork within the mission compound.

Rev Fr Sakpaku, who is an opinion leader in the community, has used his position to market Godfred to personalities of influence. For instance, Godfred had the rare opportunity to take a photograph with former the President and presidential candidate of the NDC, Mr John Mahama, during the just ended general election after his attention was drawn to the works of Godfred during his recent visit to Maamekrobo in the Afram Plains.

Rev Fr Sakpaku, who is the mouthpiece on national issues in the community, makes sure that at any important gathering in the community, Godfred’s work is exhibited at a strategic place that the guests would not miss.

Explaining why he is into the “construction of the buildings,” Godfred said he was only challenging and preparing himself for the area he had already identified to fit himself into, which is the architectural area.

He explained that initially his intention was to be an auto engineer and so, he started designing various cars with the paper cards, “until one day I saw the work of an architect and I felt that will be more challenging.”

Initially, Godfred's prayer was to perform well in his Basic Education Certificate Examination (BECE) in 2022 so that he could gain admission into the Apostle Safo School of Art and Science (ASSAS).

“That was when I was thinking of doing the auto engineering but now that my focus has been shifted to the architectural, I do not know whether or not that will be relevant at that school, else I will like to go to a technical school,” he explained.

A son of a fashion designer and a business woman, Godfred is the third of four siblings.

He believes everyone has talents and advised his mates to take schooling seriously and try and identify their areas of interest or their talents so that they could be helped to harness them.

His favourite subjects are Mathematics and science.