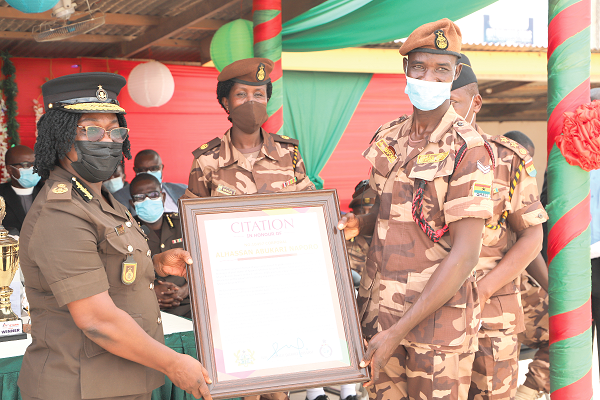 Four officers of the Ghana Prison Service have been honoured for their outstanding performance in the service.

They are Corporal Alhassan Abukari Naporo who was awarded for fighting against trafficking and prevented a yard escape planned by a convicted prisoner, Sergeant Ama Nyarko was also awarded for being the Best Allied Student with the successful completion of the Advanced Army Drill and Duties Course, while Sergeant Stephen Amoah Saah was also awarded for his hardworking and discipline towards his duties.

Another personnel, Corporal Cynthia Asigbey, was also promoted to a Sergeant rank for single handedly re-arresting an escaped convict who had escaped a lawful custody since March 28, 2018 while on her way after a medical review at a hospital.

They were awarded with a citation and GH¢500 each during the Ghana Prisons Service Nine Lessons and Corals service held at the Prisons Canteen yesterday.

The coral service, which was interspersed with scripture readings and song ministration by the service personnel from the Greater Accra, Nsawam and the James Camp choirs, descended into an atmosphere of celebration of successes and also thanksgiving to God for his protections throughout the year.

The Director General of Prisons, Patrick Darko Missah, in his address commended the service personnel for their tremendous work that had contributed to the decrease in escapes across the country’s prisons from 16 by the close of last year to a single digit of four this year of  which two were recaptured.

He further commended the government for supporting the service with 10 brand new 2020 Nissan Hard body model pickups to facilitate their operations.

“The service was also fortunate to receive a Benz Bus Ambulance from a philanthropist, Evangelist Rev. Owusu -Ansah to aid in quality health care to the inmates as well as the officers,” he said.

Mr Missah also cautioned the service personnel to desist from the trafficking of prohibited items such as mobile phones, cigarettes, Indian Hemp into the prisons  by inmates.

”The administration will not relent in meting out the requisite punishment to deter the malevolent conduct of these immoral officers in the system, as happened in the course of this year.

“Serious efforts are in place to sanitise the system, by ensuring that such characters are weeded out of the service,” he added.

He also called on the personnel to rededicate themselves to their responsibilities, especially during the yuletides, to provide the inmates the needed care and support.

The Director-General said that was important since the inmates had become part of their families by virtue of the nature of the work as they would be spending most of their period on duty rather than on the frolic of their own times.