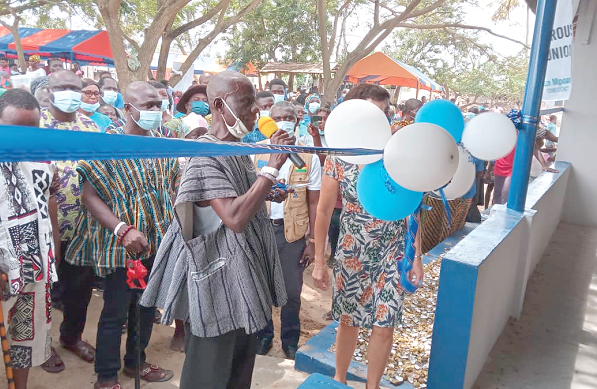 Mr Kofi Agbogah speaking at the inauguration of the processing shed.
30.5k Shares

A non-governmental organisation (NGO) with focus on fisheries resources, environmental and coastal management, Hen Mpoano, has called on the government to urgently pay more attention to the survival of clam fisheries in the country.

Clam are a kind of shellfish which can be eaten. An example is oysters.

The Director of the NGO, Mr Kofi Agbogah, who made the call, said clam fisheries alone raked in about $4 million a year, and that the sector employed more than 2,000 people in the country.

He expressed the worry that in spite of the critical contribution of clam fisheries to the country’s food security and economy in general, the government, over the years, had not paid any attention to the sector.

Speaking at a handing over of a clam processing shed and inauguration of co-management unit for the clam fishers, processors and traders at Kponkpo in Ada Foah in the Greater Accra Region last Wednesday, the Director of Hen Mpoano said clam fisheries were too critical to be ignored by the government.

Mr Agbogah also expressed concern that aside the clam fisheries which had been ignored by state authorities, the Ministry of Fisheries and Aquaculture Development, as well as the Fisheries Commission had ignored estuary and lagoon fisheries.

“Lagoon and estuary fisheries generally don’t count in our fisheries statistics,” he noted, saying the sector “is too important to be ignored because this clam fisheries alone will generate over $4 million a year in this sector.

“So if $4 million is going directly into the pockets of fishermen and fisherwomen, clam harvesters and processors, it is something that you have to pay attention to.”

He said there were so many estuaries and lagoons in the country which when properly managed, could serve as sources of livelihood for the people who live by them, citing Bosomtwi, Ankobra Estuary, Densu Estuary, Pra Estuary, Ada Estuary, and Princess Town as examples.

He said many lagoons in the country had been destroyed due to poor management and governance, noting that “once you can show that these estuaries are very important, people will begin to protect them to enhance the livelihoods of communities that are living around them.

The government has this year approved a Fisheries Co-management Policy to guide how the fisheries resources of the country are managed, both marine and inland including lagoons and estuaries.

Fisheries Co-management is a strategy for managing fisheries resources through shared responsibility among government, resources users and other key stakeholders.

Mr Agbogah said it was about time the government and the Fisheries Commission in particular, protected clam fisheries to benefit the communities whose livelihoods depended on the sector.

Touching on the co-management policy, Mr Agbogah said the policy was an effective approach to enhancing community participation in decision making and adherence to rules and regulations, adding that it provided opportunities for fisheries management options that were precautionary, adaptive and flexible.

The Director noted that since 2017, under the Far Dwuma Nkodo project, Hen Mpoano and Environmental Justice Foundation (EJF) had worked with clam fishers to document the traditional management arrangements that regulated the industry.

“We are hopeful that the new co-management policy would help to get communities to manage their fisheries with support from the government,” he said.

She said clam farming was part of a larger project that the EU was financing, both in the marine and inland fisheries in the country.

Ms Acconcia, however, expressed the worry that just as the marine fisheries was confronted with a myriad of illegalities, the clam fisheries too was not spared  the illegalities and challenges.

She said the fishing grounds for the clams had dwindled from 100km from the pre-dam era to a narrow stretch of 10 km today because of the development of sand bars at the estuary, coupled with overharvesting.

She pointed out that the clam fisheries faced many challenges due to the “absence of effective cooperation among the different interests in the region, regulation and enforcement,” saying that “one way to address these challenges is the application of co-management principles.”

The EU Ambassador further intimated: “By having an effective co-management unit, the clam industry can work to resolve conflicts and ensure clam fisheries are a sustainable source of income.”