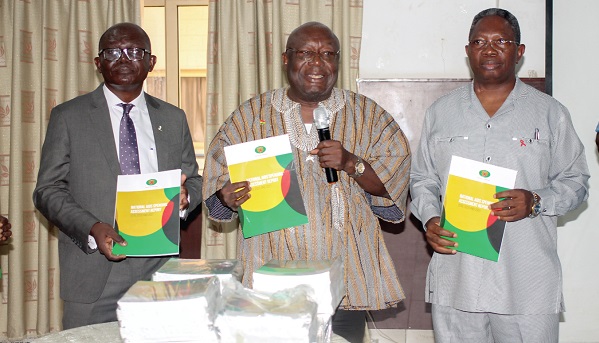 The Ghana AIDS Commission (GAC) has launched the National AIDS Spending Assessment (NASA) report for 2019, 2020 and 2021, which shows that the country spent $323.7 million in the years under review.

The Director-General of the GAC, Dr Kyeremeh Atuahene, who made this known at the launch and dissemination of the NASA report, said the funds for each respective year were the total contribution made by the government, the private sector and the international donor community.

However, he said the findings showed an over-dependence on international sources in financing the national HIV response, as it had been over the years.

NASA is a comprehensive and systemic resource tracking method that describes the financial flow, actual disbursements and expenditures on HIV and AIDS programmes.

The NASA process, which is a key tool for tracking resources and expenditures for the national HIV and AIDS response, maps the financial transactions on HIV from its funding source through to the final destination — the beneficiaries receiving goods and services.

It describes the HIV and AIDS financial flow and expenditures for both health and non-health activities for the period mentioned, while identifying and addressing funding gaps.

The report focuses on three dimensions — financing, provision and consumption — and the overall estimates on the expenditures of the public and the private sectors and international donors on the national HIV and AIDS response.

However, Dr Atuahene said there was the need to use the report as an advocacy tool for re-prioritising HIV spending as the country sought to address the complex inequalities in resource allocation.

“We all have a part to play in defining how we introduce and infuse quality into the daily activities of the national response,” he said.

The Executive Oversight Minister for GAC and Minister of Environment, Science, Technology and Innovation, Dr Kwaku Afriyie, in launching the report, said NASA aimed at identifying the funding gaps to address them and improve financial information on HIV and AIDS expenditures for the country, as well as address the gap in reporting to national and international reporting platforms.

In that regard, he urged the GAC to continue engaging the government and development partners and all the multi-sectoral stakeholders of the national response to mobilise adequate funds to finance the implementation of the National Strategic Plan 2021-2025.

That, he said, would help achieve the national targets and end the AIDS epidemic by 2030.

The GAC Monitoring and Evaluation Coordinator Emmanuel Tetteh Larbi, giving a highlight of the report said even though the quantum of funding for HIV kept increasing in the years under review, HIV spending was more than the estimated resources.

He said HIV care and treatment took the largest share of HIV financing, followed by programme enablers, health systems strengthening, and HIV prevention with the report, indicating that HIV response in Ghana was heavily dependent on international funds.

A representative of the UNAIDS Country Director, Cynthia Adobea Asante, commended the GAC for the report and pledged its continued support to ensure that the vulnerable and marginalised were protected.