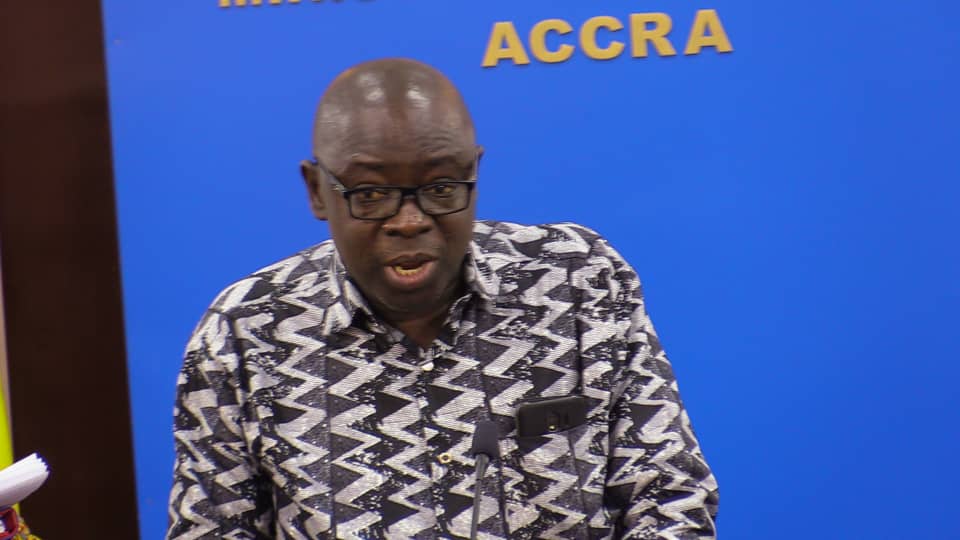 The Minister of Lands and Natural Resources, Kweku Asoma Kyeremeh has attributed the pollution of water bodies to recent rains.

He indicated that the current state of water bodies is not as a result of illegal mining activities, popularly referred to as galamsey.

Videos and images of some water bodies recently went viral, showing the deterioration of these water bodies despite the ban on illegal mining.

This has raised questions about the competence of the anti-galamsey taskforce’s fight against galamsey.

However addressing journalists in Accra on Thursday, the Minister of Lands and Natural Resources said although some miscreants are still engaging in illegal mining in some parts of the country, the taskforce has generally done a good job.

“There are some miscreants who still move about to do this illegal mining and do the washing into the river bodies but it is not as much as it used to be prior to 2016/2017. Prior to the date the ban was put in place and after the ban was lifted , we saw some form of sanity and it is that sanity we are talking about today.”

“The rains that set in today might have caused some river bodies to go close to the bad state that we found them but it is not all that bad as we saw in 2016. Some illegal miners are in the forest today, it is true, we are chasing them. That is why we have laws. Otherwise there would not have been laws dealing with such misfits. We have been able to clamp down on these illegal activities to a larger extent,” he added.

Pressure is mounting on the government to dissolve its Inter-ministerial Committee on Illegal Mining, following what has largely been considered as a lost fight against illegal mining.

The latest to join numerous calls for the collapse of the government agency is the Artisanal and Small-scale Mining Africa Network (ASMAN).

The safe mining advocate wants the committee to be replaced with the yet-to-be-launched Multi-Sectoral Mining Integrated Project (MMIP).

Executive Director of  ASMAN, Nii Adjetey Mensah says until the inter-ministerial Committee hands over its mandate to the Minerals Commission and Lands and Natural Resources Ministry, the battle against galamsey cannot be revived.

“Everybody is put in place for some work. When I look at the inter-ministerial committee,  there is no work for them to do. The Committee was headed by  the Minister for Environment. We thought that the government wanted to play a clear role.  The Minister of Lands should  take up his job and get the Minerals Commission to be active and get the work done. We the miners are saying that they are a failure. The inter-ministerial committee should be dissolved.”

The Media Coalition against illegal mining had reiterated its calls for the disbandment of the Inter-ministerial Committee on illegal mining.

Convener of the group, Ken Ashigbey, who spoke to Citi News said mandated state agencies must be empowered to sanitise the mining sector.

‘Galamsey fight has failed; rise above sweet but hollow rhetoric’ – NDC to Akufo-Addo

The opposition National Democratic Congress (NDC) also described the government’s fight against galamsey as a failure.

According to the party, several actions by government appointees have rendered the fight fruitless.

The NDC’s Communications Director, Sammy Gyamfi attributed the failure to the President’s inability to bring to book appointees of government allegedly noted for fueling the activities of illegal mining.

“The fact tha, President Akufo Addo’s fight against galamsey has failed is no longer in dispute. The spectacular failure, of the supposedly anti galamsey fight, underscores what we all know to be the truth that President Akufo-Addo’s policies and offerings most at times are instituted of self-aggrandizement and an avenue for crocked members of his party and government to line their pockets through corrupt means.”

He called for an overhaul of the Interministerial Committee on mining together with the government’s approach to the fight.

The secretariat has also been hit by alleged bribery and corruption in Anas Aremeyaw Anas’ exposé on illegal mining.

It was commissioned in March 2017 by President Akufo-Addo to reform artisanal and small-scale mining in the country.