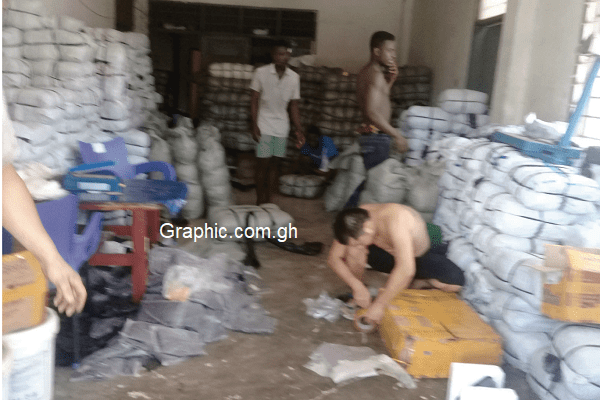 A team from the Ghana Standards Authority (GSA) and the Ghana Police Service last Thursday raided two residential facilities in Accra and halted operations at the make-shift manufacturing hub for the production and distribution of plastic rubber bags.

Zheng Hua Feng Limited and LWW Waste Plastics Recycling Company Limited — sited at Sakaman, near Dansoman — operated without the required certifications for five years, according to the GSA.

The team locked up the facilities and asked the workers, made up of both Chinese and Ghanaian nationals, to vacate the premises.

Speaking to the Daily Graphic on how the GSA discovered the factories, the Business Development Manager of the GSA, Mr George Anti, who led and supervised the operation, explained that the GSA had since the beginning of the year relied on information from its representatives in all districts in the country to conduct mystery shopping and market surveillance to identify illegal manufacturers who were flouting the country’s laws on standards.

“So we tested these products and realised that some of the plastic bags did not conform to the right standards because some of the chemical properties in the plastic bags were being absorbed into food kept in it, so you eat food from these bags without knowing that in the long term it can cause cancer or some serious health problems for consumers,” he said.

Beyond operating without the right certifications, including the basic business registration certificate, the facility is also situated in the heart of a residential area in violation of the Environmental Assessment (EA) Regulations (LI 1652), according to the GSA.

A resident of the area, who spoke to the Daily Graphic on condition of anonymity, said the activities of the two factories were a nuisance to the community as their plant emitted excessive smoke which polluted the air.

“As for the environmental hazard, it affects us but we are all tenants, so there is little we can do if the government does not step in,” he said.

“I took my son to the clinic and they said he had respiratory problems. They even thought I smoke, but when I told them about the situation here, they advised that we move but we can’t move now,” he lamented.

The working conditions at the two factories, according to the workers who spoke to the paper, were terrible.

There were no safety measures, including safety clothing for workers at the factories, while ventilation was poor, with unbearable heat emanating from the machines, the Daily Graphic observed.

Ghanaian workers at the factories told the Daily Graphic that they were paid GH¢15 for a day’s work spanning 7 a.m. to 7 p.m.

One of the manual workers, Mr Patrick Adu, said the long hours of work at the factories was detrimental to their health, but they were forced by economic conditions and the unavailability of jobs to persist with it.