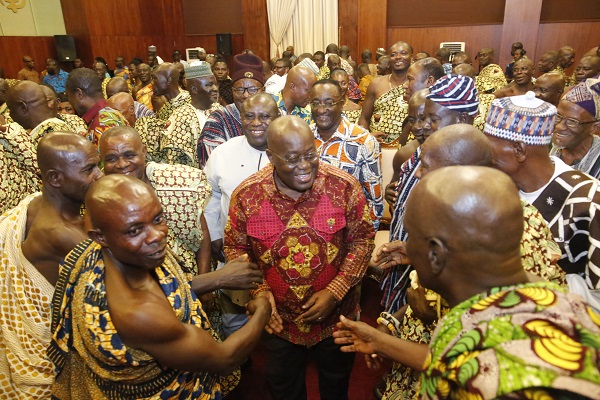 President Nana Addo Dankwa Akufo-Addo has assured cocoa farmers that the government will not reduce the current producer price of cocoa, in spite of the plummeting world market price.

President Akufo-Addo said he took the decision not to reduce the producer price because farmers had been producing the wealth of the nation.

Besides, he said, through the toil of farmers, a lot of activities in the country were being subsidised and “it is only fair that when things turn against them, the state should come in to help”.

President Akufo-Addo gave the assurance when he received a delegation of the Ghana Cocoa, Coffee and Sheanut Farmers Association at the Jubilee House in Accra last Friday.

The President’s assurance came against the backdrop of a recent call by International Monetary Fund (IMF) for the government to reduce the producer price of cocoa to reflect changes in international cocoa prices.

According to the IMF, the downward adjustment would help COCOBOD deal with its current funding gap of GH¢1 billion.

At its seventh and eighth review under the recently concluded External Credit Facility (ECF) programme, the IMF said the gap had been due to the government’s inability to reduce the producer price paid to cocoa farmers at a time global prices of the crop had been falling.

President Akufo-Addo said that, in sum, “social justice” informed the decision to maintain the current price of the produce.

He reiterated the fact that Ghana and Cote d’Ivoire, which accounted for 60 per cent of total world cocoa production, were working closely to get better conditions and prices for cocoa farmers.

The President explained that the collaboration would involve coordinating production and marketing, among other areas, in order to get better prices.

He expressed concern over the fact that it was those who bought the cocoa who made huge profits, while the farmers who worked hard on the farms got peanut, a development which, he said, must cease. 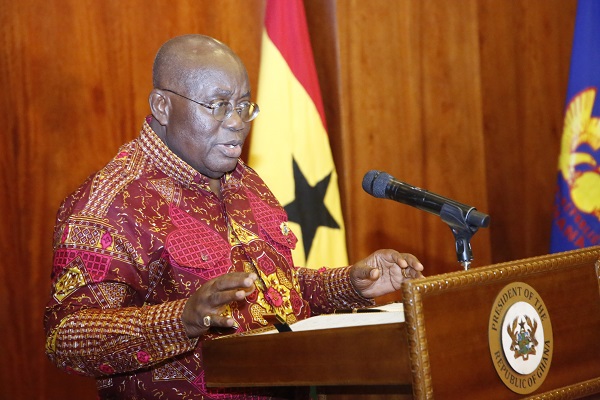 President Akufo-Addo expressed delight that the farmers had appreciated the various government interventions, including fertiliser subsidy, the replacement of old cocoa trees with new ones and hand pollination.

He appealed to the farmers to be vigilant and support the government to deal with “nation wreckers” who stole fertiliser and sold it to farmers in other countries.

“It is not correct that a few people, for their selfish interest, will take the fertiliser subsidised by the sweat and hard work of Ghanaian farmers and smuggle it to Burkina Faso and Cote d’Ivoire. It is not right and you have to help me stamp out the smuggling of fertiliser out of the country,” he told the farmers.

The President saluted the farmers for helping the government to deal with illegal mining and assured them that the fight would not be put on hold.

Rather, he said, the fight against the canker would be intensified and debunked the assertion by sections of the media that he would lose the 2020 elections because of the ban on illegal mining.

He said he owed it as a responsibility to the current and future generations to defeat illegal mining to halt the devastating pollution of waters bodies and the general destruction of the environment, adding that if they were allowed to continue, there would be no Ghana in the next decade.

President Akufo-Addo disclosed that at the end of May this year, when Parliament resumed sitting, the government would table before it a bill for the establishment of a Tree Crop Development Authority, which had been in the works for ages, to focus on sheanut, coffee, rubber, mango and coconut.

He said the law would establish an institution just like COCOBOD and provide strong institutional support for the crops, so that both farmers and the country would derive the maximum benefit.

He said coffee and shea butter had enormous potential for the country because available information indicated that they attracted billions of dollars in areas such as the USA.

“We should get inside there and make some of that money for ourselves,” he stressed.

Realising that goal, President Akufo-Addo said, would require cooperation between the government and farmers to grow the industry to the level that cocoa had reached.

Reacting to an appeal by the farmers for solar lamps and mosquito nets, the President directed the Minister of Food and Agriculture and the Chief Executive of the COCOBOD to ensure that they assisted farmers with their request. 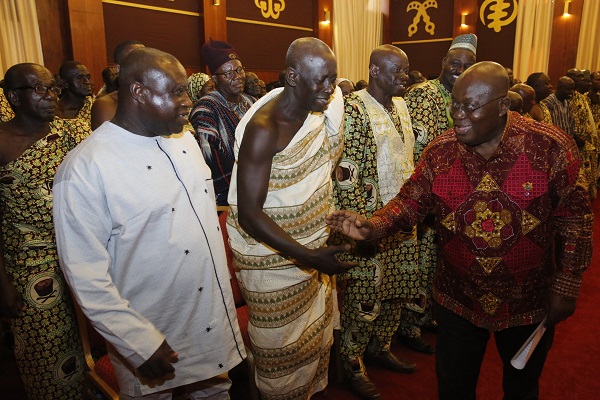 The President urged members of the association, which has a membership of about one million, to place emphasis on their internal governance and abide by its laid-down rules, regulations and constitution in selecting their leadership and managing their affairs.

He said that was the best way to grow any organisation, reduce tension and afford group members the space to work in unity and solidarity.

Answering a question by a farmer from the Volta Region, the President said the Eastern Corridor roads would be taken care of very soon under the Sino Hydro projects.

The Spokesperson for the association, Alhaji Imoro Issifu Alhassan, said the farmers were increasingly worried that cocoa prices on the world market had been going down, to the extent that some stakeholders had suggested that local cocoa prices must be reduced to save the national coffers.

On that score, he commended the President for maintaining the producer price.

He also lauded the President for the various social intervention programmes the government had instituted, especially the free senior high school policy, which had afforded poor farmers the opportunity to send their children to school at no cost.