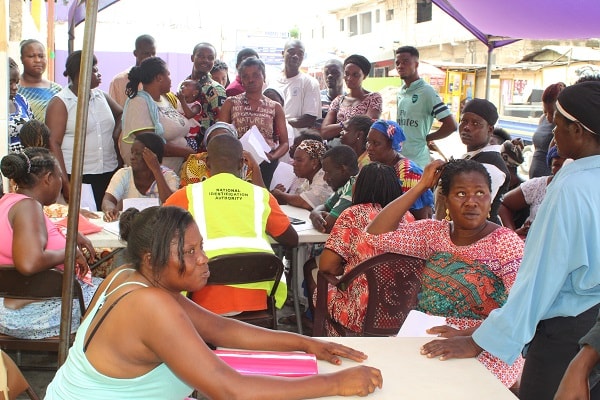 Some residents of Akweteyman registering for the Ghana Card at the St Anthony of Padua Registration Centre. Follow @Graphicgh

Some residents of parts of Accra are going through various challenges and frustration in their bid to acquire the Ghana Card in the National Identification Authority’s (NIA’s) mass registration exercise in the Greater Accra Region.

Closely related to that are those who wait in long queues to have their turn to register.

Some people told the Daily Graphic during a visit to some centres that they had to wait between three and seven days to get their Ghana cards, while others claimed that even though they had met all the requirements and gone through the process, their cards were yet to be issued.

The cards are expected to be issued instantly.

The Daily Graphic found long queues at some of the registration centres.

While some of the centres had made provision for seats, other places had no such arrangements, leaving people standing to wait for their turns.

In some places, there were scuffles and misunderstanding among the patrons over their positions in the queues, while the registration process had stalled at some centres due to technical challenges.

Some of the areas visited are the Manhean Electoral Area near Ablekuma, the Darkuman East Electoral Area, the Okaikoi North Constituency and Kaneshie.

In the Manhean Electoral Area, it was observed at two centres — Great Rock Redeemed Church and the Apostolic Church — that the registration officers registered a minimum of 60 and a maximum of 90 people in a day, depending on how fast their equipment worked.

A frustrated trader, Ms Cynthia Amankwah, a resident of Manhean, said it had taken her nine days of visits to the centre “but I still don’t have my card”.

She said she had gone through the process of registration twice, since she was told her initial process was not well captured and she was required to start the process again.

“I was issued with a printed form and asked to return for my card last Wednesday. I have been coming here every day since then but I just found out it is still not ready. The process is ending tomorrow and I do not know where I can go to get my card later,” she lamented.

At the St Mark Methodist School in Darkuman, some residents were seen fighting over numbers which were being distributed to them to ensure smooth coordination of the process.

Alhassan Bukari, who was seen trying to broker peace, said: “I came here at 10 p.m. yesterday and joined a queue and it’s past 12 noon today, yet I’m yet to start the registration process.”

He said the “process is too slow. The registration officers also keep complaining about their system breaking down and network issues. It is very frustrating. I don’t think they can register all of us during this phase one”.

In the Okaikoi North Constituency, most people complained about the photography stage which they said was slow.

At the Christ Believers Church at Nii Boiman, Mr Samuel Antwi, a trader, said: “I filled my registration forms three days ago but I am yet to take my picture. They told me to go and come the following day after I had completed the registration forms. I came here yesterday and my picture could not be taken. Today too I came here around 9 a.m. and now it is almost 12 noon and I am still in the queue. I am worried about the money I have been spending on transportation from my home to this place and back.”

At the Society for the Disadvantaged in Kaneshie, Mrs Adiza Usman said she came to the centre at 8 a.m. and was 10th in the queue, “but it is past 1 p.m. and only five people have been called to have their registration done. It is because some individuals have been using the back door. They do not join the queue but they are attended to. This development has made a lot of people lose interest in this whole process”.

Most of the registration officers and supervisors at the various centres visited were not willing to speak to the Daily Graphic and explained that they had not been authorised to speak to the media.

They confirmed that the development had resulted in delays in the process, sometimes causing brawls between the registration officers and the individuals who were there to register.

Reacting to the issues, the Head of Corporate Affairs at the NIA, Assistant Commissioner of Immigration (ACI) Mr Francis Palmdeti, called on the public to exercise patience and gave an assurance that everybody would be captured.

He said the mass registration exercise was not the end of getting people registered onto the national identification database, but there would be continuous registration as the authority would set up offices for that purpose after the mass exercise.

“We appreciate the enthusiasm people have shown in the exercise, but we appeal to everybody to exercise patience. Even if we leave the area, there will still be what we call continuous registration as offices will be opened to attend to people,” ACI Mr Palmdeti told the Daily Graphic which called him up for some explanations.

The head of corporate communications at the NIA said the rush could be linked to people’s suspicion that the Ghana Card could be a requirement for registration into the electoral register, adding that whatever the case the authority would not leave anybody behind, hence the need to exercise patience and restraint at the centres.

To those who sleep overnight at registration centres, ACI Mr Palmdeti drew parallel with similar occurrences at the Passport Office and on voting days, an attitude which had become part of the national life where out of the zeal to get things done, people showed up for such exercises way ahead of the advertised time.

“It is about how people see the exercise and how they want to position themselves to get registered. Obviously, if the exercise starts at 7 a.m. and you come in at 2 a.m., it will translate into long hours of waiting at the centre. But what we need the public to know is that it is in the interest of the NIA to get everybody registered, so they should exercise patience; everybody will be captured,” he stated.

For locations where they are very bad, he said the authority had set up “print farms” where the cards were printed in bulk and brought to be distributed at the centres where the people registered.

He said the authority was also exploring other alternatives including the use of satellite connections as well as relying on the infrastructure of the Bureau of National Communications for places it could access to facilitate the exercise.