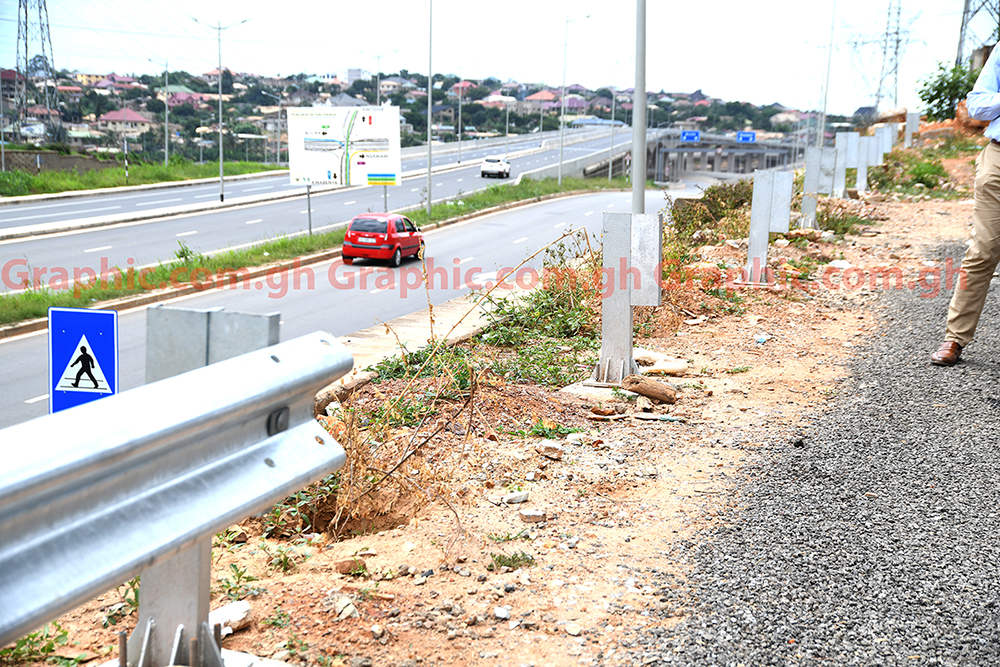 Barely three months after the inauguration of the Pokuase Interchange, some unscrupulous persons have stolen some of the newly installed galvanised crash barriers mounted at the interchange, thereby posing a threat to road users.

The stolen crash barriers, valued at $3,500 and meant to protect vehicles from falling over from a high embarkment onto the main road for vehicles coming from Kwabenya, cover a stretch of 40 metres.

The total number of crash barriers stolen is 10, each measuring four feet.

As if that is not enough, 40 streetlights on the stretch have also been damaged at the interchange. 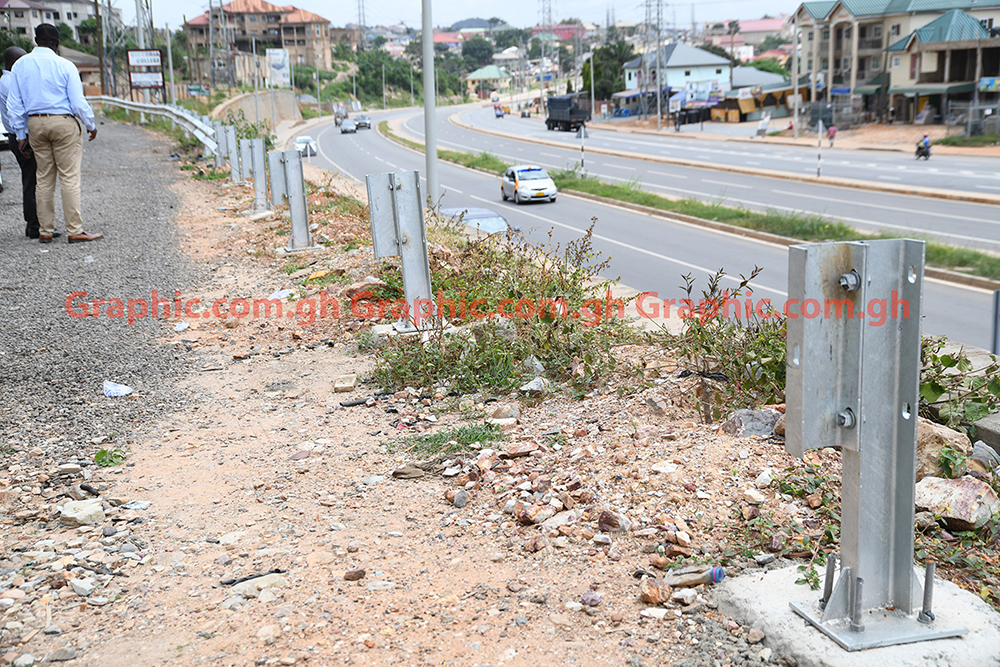 The stolen barriers were mounted on a high embarkment or cliff to prevent vehicles using a service road from the Victoria College area at Pokuase from falling over from a height of about three metres onto the road from Kwabenya towards the main interchange.

On Monday (October 4), when the Daily Graphic toured the interchange, it observed that although the bolts and nuts holding the barriers had been welded to prevent easy removal, the crash barriers had been removed, nonetheless.

Most motorists who were using that portion of the road did not realise the danger ahead as they drove by. However, a few who might had observed that the stretch had become bare reduced their speed as they approached.

Speaking with the Daily Graphic, the Resident Engineer of the Pokuase Interchange and Local Roads Project (Associated Consultants Limited), Mr Kwabena Bempong, said the incident had since been reported to the police for action, adding: “This is very serious because if we do not put a stop to it, all the crash barriers that we have on the interchange will eventually be stolen.”

“There is the need for us to nip it in the bud as quickly and as soon as possible,” he emphasised.

He said an errant vehicle could fall from the access road near residential facilities, mostly used by private persons, to the main road, hence the construction of the barriers.

“This is not the only area; wherever we have an embarkment or retaining wall and roads at two different levels, we provide crash barriers,” he pointed out.

Mr Bempong noted that the 40 streetlights that were destroyed had since been replaced.

Another problem, he said, was the use of jacks on the asphalt by vehicle owners who burst their tyres while driving.

He explained that placing the jack directly on the asphalt to replace burst tyres could result in depression of the road, leading to its final deterioration.

He said there were others who did unauthorised U-turns on the road, resulting in a number of accidents, and appealed to drivers to desist from that and use the designated routes for U-turns, although they might appear long.

“We have done our part — the engineering; the rest is left with the police and the municipal assembly. They, especially the police, are the enforcement agency and we appeal to them to increase their patrols at the interchange.

“For the residents, if you see something that is suspicious, I think you need to question anyone involved in that,” he said. 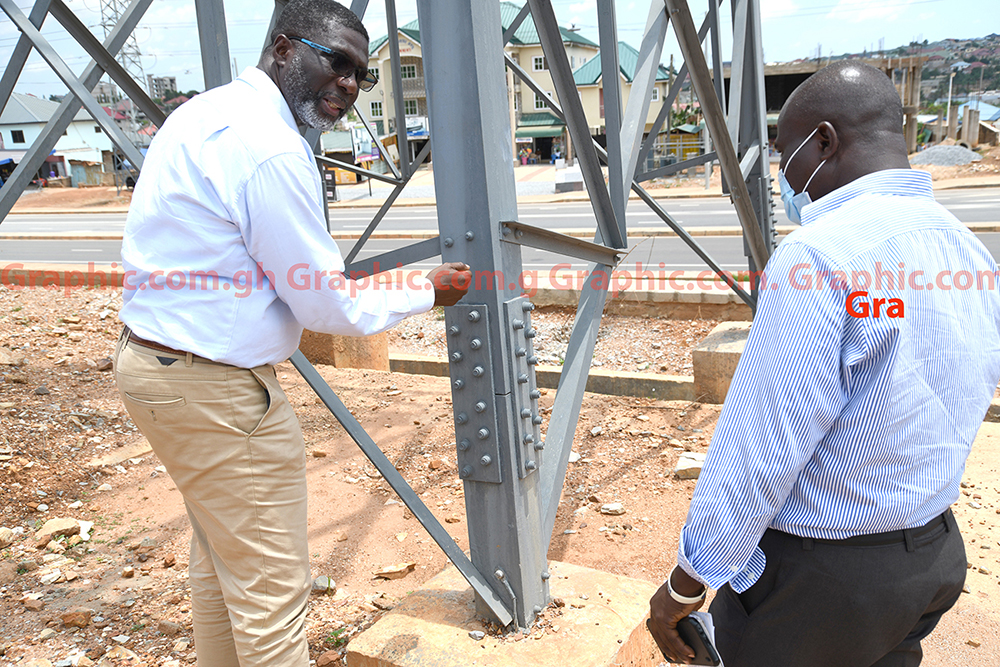 Meanwhile, the Amasaman Divisional Police Command has mounted a manhunt for the criminal persons behind the stealing of the barriers.

The acting Director General (DG) of the Public Affairs Directorate of the Ghana Police Service, Assistant Commissioner of Police (ACP) Mr Kwesi Ofori, said the Police Administration had instructed patrol teams to patrol the area, particularly during the night when it was believed the criminal act was conducted.

That, he told the Daily Graphic, would not only help arrest the criminal-minded persons but also stop them from continuing with the act.

He explained that last Sunday the engineers reported to the police that 10 bolted galvanised road barricades at the Victoria College area close to the Sel Fuel Station end of the interchange had gone missing.

Under the cover of darkness

ACP Ofori said following the report, some policemen visited the scene and found that the bolts and nuts on the existing barriers had been welded.

He said preliminary investigations indicated that the suspected thieves allegedly stole four streetlight connectors and subsequently plunged the area into darkness before carrying out their ‘operation’.

In the case of the stolen connectors, he said they had been replaced and power had since been restored to the Pokuase-Kabana end of the interchange.

He further said when the police interviewed some of the residents and passers-by, they all said they had no idea about the incident.

He appealed to residents of the community to “serve as the ears and eyes of the police” by reporting any suspicious characters seen tampering with any part of the project.

A shocked Ga West Municipal Chief Executive, Mr Clement Wilkinson, described the situation as a clear example of criminal intent of people who only thought of their selfish interests.

He stressed that patrols in the area would be stepped up to prevent such acts from recurring and possibly apprehend the culprits.

“The Municipal Security Committee (MUSEC) has taken some measures about the situation at the place. We have to stop it; we should not allow it to continue. This is really a shame,” he said.

The General Secretary of the Christian Council of Ghana, Rev. Dr Cyril Fayorsey, also condemned the act, describing it as “unpatriotic and unnationalistic”.

He did not understand why some persons would steal facilities that had been provided for ensuring safety on the road, adding that the money that would be used to replace the stolen items could had been used to provide other facilities elsewhere.

“Any form of stealing is not good. The police should look out for those behind the stealing of the barriers and bring them to book for them to face the full rigours of the law,” he said, and called on people in the various communities to help in protecting state property, since security personnel could not be everywhere at every time.