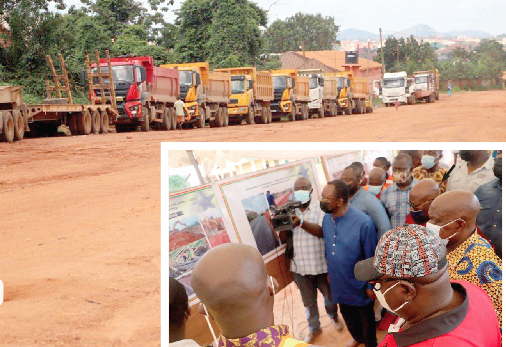 The Paramount Chief of Kuntenase in the Bosomtwe District of the Ashanti Region, Barima Amankwah Adunan Ababio II, has reported the region's lead road contractor, Kofi Job, to President Nana Addo Dankwa Akufo-Addo, for abandoning work and only reporting to site when the President is in town.

Kofi Job, who is undertaking a number of road construction works in the region, including the Anwiankwanta-Obuasi Road, has not been to site for a long while but flooded the lake road with huge trucks when the President arrived, apparently to show that he was working.

The chief, one of the key actors of the Kumepreko demonstration launched the scathing attack on the contractor when President Akufo-Addo paid a courtesy call on him last Sunday as part of his tour of the Ashanti Region.

He said the President needed to reprimand the contractor and if possible, rope in other contractors to assist him.

But President Akufo-Addo said Kofi Job was one of the best contractors from the region and it was time the people appreciated his works.

He said the road problem had existed for ages and all could not be tackled at once, calling on them to be patient with him to deliver.

Speaking in Twi, the President promised that all the projects will be completed before the end of his term.

At Twedie in the Atwima Kwanwoma District, residents also demonstrated against the contractor, the Asabea Engineering Limited, for the delay in fixing the roads.

The Kwadaso-Trabuom road, which was awarded on contract in 2018 and was expected to have been completed last year, had stalled, making life extremely difficult for residents.

They alleged that once the President left, the contractor would be nowhere to be found.

"He only comes to site whenever the President is in the region," a resident alleged.

But the contractor, Samuel Larbi, said the upgrading of the 15. 2km Kwadaso-Trabuom road had delayed because funds had not been released from the government.