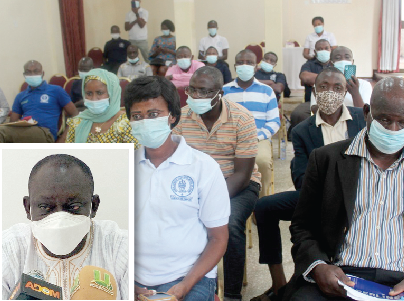 The Judicial Service Staff Association of Ghana (JUSAG) has given the government two weeks ultimatum to resolve all issues regarding the assenting and implementation of the 2021 salary and related allowances.

At the National Executive Council (NEC) meeting of JUSAG at Abesim, near Sunyani, in the Bono Region, the leadership vowed that the association would advise itself if the government failed to favourably respond to their “legitimate demands”.

The President of the association, Mr. Alex Nartey, said the seeming delay on the part of the government in assenting to and implementing the decision of the Judicial Council had occasioned agitations among their members.

Mr. Nartey, therefore, called on the government to take the necessary steps to avert any further agitations by the staff of the Judicial Service.

He said the delays on the part of the government in the matters of concern to the association was unacceptable, explaining that members of JUSAG could no longer wait.

“We, therefore, think that within two weeks, from October 1, 2021, government must take action on the recommended salaries. If within two weeks government does not do anything about it, nobody should blame us because we will advise ourselves according to law,” he stated.

Mr. Nartey said although the Judicial Council had concluded on the 2021 salary and other related allowances for the same to be considered by the government in line with the provisions of the 1992 Constitution, the year was getting to a close and nothing had been done about the assenting and implementation of the said salary and other allowances for staff of the Judicial Service.

He said per articles 149 and 158 of the 1992 Constitution, as well as the Supreme Court’s decision in the JUSAG case, the Judicial Council had the mandate to determine the conditions of service and to primarily, with the final approval of the President, ascertain the salary and other allowances for the staff of the Judicial Service.

He explained that the management of the Judicial Service and the government were fully aware that the service staff were due to be given new or revised salaries from January 2021, and that the processes and activities necessary for the payment of the new salaries had been concluded and the government had been advised on what the workers of the Judicial Service had to be paid starting from January this year.

“We have cooperated with management and all stakeholders, but as we speak now, the year is getting to a close and nothing has been done in spite of what we have done as union and what the Judicial Service had done in respect to the salary increment,” Mr. Nartey stated.

He explained that it appeared that the government did not want to give the recommendations the urgent attention that the matter required.