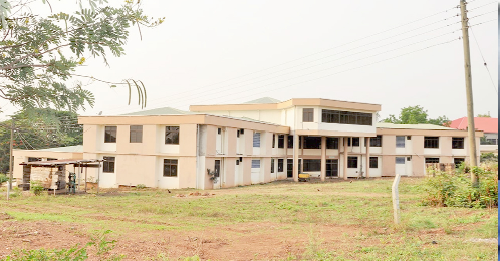 The giant structures of the Volta Regional Library Complex, which is 85 per cent complete, are now deteriorating rapidly.

The walls have cracked and recent rains have dug gullies around the foundation of the complex.

When it rains heavily, the main entrance and reception are filled with large volumes of water.

Meanwhile, lizards and grass-cutters have taken over the uncompleted building which is heavily engulfed by weeds.

“If nothing is done immediately to reverse the trend, the entire structure which was put up to this stage with a colossal amount of money will crumble sooner than later,” the Regional
Director of the Ghana Library Authority (GLA), Mr Guy Amarteifio, said.

He said the GETFund project which took off in 2003 with an initial contract sum of GH¢1.9 million then was scheduled to be completed in 2005.

Construction, however, stalled soon after take-off, resumed in 2014 and stalled again in 2016, with most of the job executed.

Mr Amarteifio said the GLA moved into what used to be the Home Science Centre of the Kpoanyigba Junior High School at Ho-Bankoe when the project took off, “but we were ejected by the school authorities in December last year.”

Subsequently, he said, the GLA was now operating from the designated processing department of the library complex that was meant for cataloguing and classification of books and other reading materials.

“Without adequate furniture, adults and children are competing for space in the room and the absence of running water and toilet facilities is a great cause for discomfort for readers and the GLA staff,” Mr Amarteifio added.

The interim reading rooms have a total capacity for 150 persons, but the furniture can only cater for 30 people.

“This situation is killing the culture of reading among members of the public,” he pointed out.

Mr Amarteifio blamed the periodic flooding of the reception and other units of the complex on the inability of the contractors to work on the landscape aspect of the project.

When contacted, the Managing Director of Messrs Tallman Houses Limited (the contractors), Mr William Nutsuakor, cited the lack of regular payments for work executed for the delay in completing the job.

“I was told under the contract that every certificate raised for work done will be honoured in 28 days, but this did not become the case; it is taking years to honour the certificates,” he said.

For instance, Mr Nutsuakor said a certificate raised in 2016 for GH¢400,000 in respect of various stages of work executed was honoured in 2020.

After that, two more certificates were raised but one got missing at the Finance and Administration Department of the Ministry of Education, the managing director added.

With regard to the thick vegetative cover around the building, Mr Nutsuakor explained that since the clients had moved into the uncompleted building, it was now their duty to clear the weeds around it.

“We will resume work as soon as we get paid for the work we have done so far,” Mr Nutsuakor told the Daily Graphic.

The Regional Consultant of the Architectural and Engineering Services Limited (AESL), the project consultants, Mr Richard Amafu, said such delays in honouring project certificates were to be expected.

For that reason, he said, it was agreed that the contractors would pre-finance certain stages of the project before the GETFund honoured the certificates.

For now, Mr Amafu said, the AESL had prepared a certificate for GH¢790,762.11 for the Tallman House Limited in respect of the project and was expecting the GETFund to make payment soon.

“Now the contractors are telling us the last payment they received two years ago was not enough to defray a credit facility they secured from a bank to pre-finance that state of the project,” he said.

On the way forward, Mr Amafu said that it was up to the contractors to raise money to complete the project while GETFund made prompt payments for certificates raised for job.

Meanwhile, there is public outcry over the delay in the completion of the project.