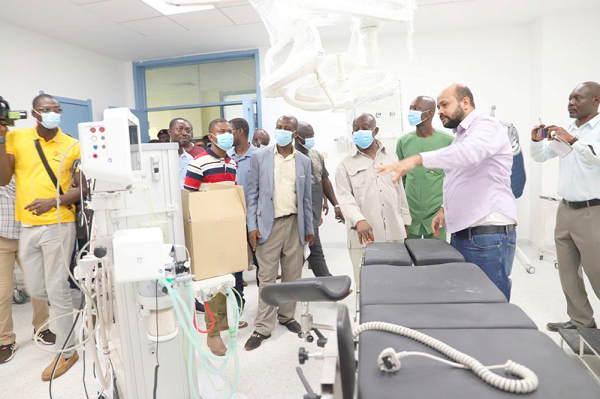 He said what was left were mainly ancillary works, including the testing of some equipment and pruning of lawns.

“We are ahead of schedule. In the coming month, the facility will be ready so that we hand over to government for it to be inaugurated,” he gave an assurance.

Mr Massaud said this when he briefed the Ashanti Regional Minister, Simon Osei Mensah, during a working visit to the project site last Wednesday to inspect the progress of work.

He also inspected the 250-bed Sawua Hospital in the Bosomtwe District of the region.

The Asante Akim Central Municipal Hospital is one of the nine hospitals being executed by Euroget De-Invest, an Egyptian investment company, with special expertise in structuring, specifically hospitals.

The nine hospitals are expected to add 1,310 beds, as well as other modern facilities, to the health infrastructure in the country.

Currently, the 1.4-kilometre access road to the Asante Akim Central Municipal Hospital, sub-contracted to Agyakot Company Limited, has now started taking shape, while the major work on the stretch – the construction of four bridges to control water from four streams along the stretch – has been completed.

The contractors were also almost done with the construction of the drainage system, and the contractor, Kwadwo Agyapong, said that aspect of the project was 70 per cent complete.

The Asante Akim Central Municipal Hospital, sited on a 145,000 square-metre plot, will run dental, cardiology, ophthalmology, paediatric, gynaecology, and orthopaedic clinics, along with four operating theatres, and has a complementary 10-unit staff accommodation.

It also has a mini-market, staff dining facility, a kitchen, pharmacy, physiotherapy unit, accommodation for lactating mothers, and a mortuary.

The hospital has three wells on the compound integrated into the backup water supply system that fills a 250-cubic-metre tank serving as a reservoir.

Mr Osei Mensah expressed satisfaction with the work done so far on the projects and commended the contractors for working within the contractual delivery period and in line with the specifications of the project.

He urged the public to exercise restraint and stated that the government would ensure the delivery of quality health care to the people.