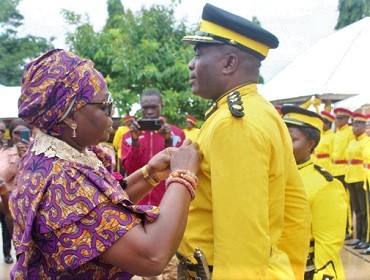 The Bono, Bono East and Ahafo Regional Command of the Ghana Prisons Service (GPS) has presented long service and good conduct medal awards to 50 prison officers at a ceremony in Sunyani.

The recipients were made up of 36 males and 14 females from five prison stations such as the Sunyani Central and Female Prisons in the Bono Region, Yeji Prison Camp in the Bono East Region and the Duayaw-Nkwanta and Kenyasi Prison camps in the Ahafo Region.

The medals were awarded to staff of the service, who had served for 16 years and above and exhibited good character throughout their operational duties.

Speaking at the medal ceremony, the Bono Regional Minister, Justina Owusu-Banahene, advised prison officers to avoid unprofessional behaviours that would bring the image of the service into disrepute.

She urged them to maintain highest standards of respect and professional conduct at all times and be mindful of the nature of their work as it involved taking care of people who had been deprived of their liberties and, as a result, were psychologically and emotionally deprived.

She said awards were pivotal in the lives of workers “as we are all aware, the slightest recognition in work, serves as a great motivation for the individual and encourages him or her to work even harder and sincerely”.

Ms Owusu-Banahene said recognising efforts of officers with awards made them to stand out and be motivated to work harder.

The Bono Regional Commander of the GPS, Deputy Director of Prisons (DDP) Benedict Bob-Dery, said despite the numerous challenges facing the command, the awardees had served with great dedication, commitment and exhibited high sense of professionalism.

He said it was a fact that the service was going through hard times, as it was encountering severe constrains in implementing its mandate of safe custody, welfare, reformation and rehabilitation of inmates.

DDP Bob-Dery, who is also in-charge of Bono East and Ahafo regions, said there was a huge accommodation problem facing the command.

He said the command had inadequate furniture, making its work very difficult, adding that the Sunyani Central Prison, which was constructed for about 400 inmates, currently had more than 900 inmates.

DDP Bob-Dery said the overcrowded nature of the prison had resulted in the outbreak of communicable diseases and also posed security challenges.

DDP Bob-Dery also expressed concern about the GH¢1.80 feeding rate, explaining that “the amount was last increased in 2011 and had remained so even in the face of increase in food prices. The amount is woefully inadequate to ensure proper feeding of inmates”.